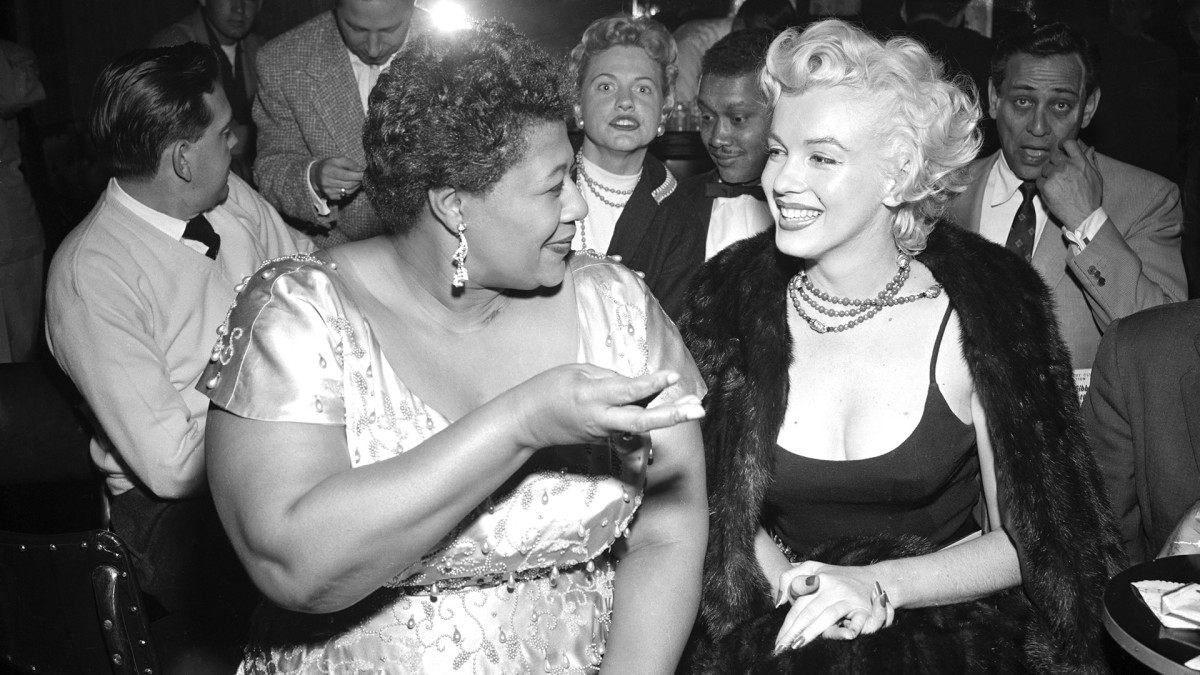 With every image of Marilyn and Ella Fitzgerald you always hear the story of how Marilyn helped Ella by getting her a gig at Mocambo. And it is true, Ella was denied a show at the infamous LA club. And Marilyn did contact the manager insisting Ella perform and that she would be there. But it didn’t happen the way many people like to think.

WHAT THE INTERNET WANTS THE STORY TO BE…

Alongside the below image of Marilyn and Ella at the Tiffany Club in Los Angeles, there is usually the caption:

Fitzgerald was not allowed to play at Mocambo because of her race. Then, one of her biggest fans made a telephone call that quite possibly changed the path of her career for good. Here, she tells the story of how Marilyn Monroe changed her life:

“I owe Marilyn Monroe a real debt … she personally called the owner of the Mocambo, and told him she wanted me booked immediately, and if he would do it, she would take a front table every night. She told him – and it was true, due to Marilyn’s superstar status – that the press would go wild.

“The owner said yes, and Marilyn was there, front table, every night. The press went overboard. After that, I never had to play a small jazz club again. She was an unusual woman – a little ahead of her times. And she didn’t know it.”

Ella’s quote comes from a 1972 article for MS Magazine.

Let us note that the image taken is not at Mocambo, it is at another Hollywood club (Tiffany Club) in 1954, a year before Ella would do her shows at the aforementioned nightclub.

Racism, obviously still an issue today, was definitely a problem in 1955. However, Ella wasn’t refused to play at Mocambo because she was black (one of the few errors in Donald Spoto’s original biography of Marilyn’s!).

Firstly, Ella never mentioned anything about race or being denied performing because she was black. She simply stated that Marilyn helped her.

Not only that but Ella was not the first black musician at Mocambo. Here are some of the non-white singers before 1955 (when Ella performed):

SO HOW DID MARILYN HELP ELLA FITZGERALD?

Ella was denied from performing at Mocambo as she was not deemed as glamorous as the other singers and musicians who did shows before her. It’s also said that it was because Mocambo wasn’t accustomed to playing the jazz music Ella would sing. Either way, her race wasn’t the reason.

When Marilyn heard that Ella was refused this opportunity, Marilyn telephoned the owner and lobbied that she should have the show. Marilyn is also said to have promised she would be there every night and it would get a tonne of publicity.

When Ella Fitzgerald performed at Mocambo between 15th -25th March 1955 Marilyn was not present.

Marilyn being a big star at the time would’ve meant there would be a large press converge of her attendance however there was none like Marilyn supposedly had promised there would be. Articles and photographs feature stars such as Frank Sinatra and Judy Garland. No Marilyn.

In addition, Marilyn was in New York between 24th and 30th March taking photos with Ed Feingersh, meaning she definitely wasn’t there every night. There are no documents including plane tickets that show Marilyn travelled to LA for these performances either. Therefore it is safe to say she wasn’t in attendance.

The below image which circulates as being at Mocambo on one of the night’s Ella performed was actually taken in December 1954, at a party for Sammy Davis Jr.

THE SAD BUT STILL BEAUTIFUL TRUTH

No one asked Marilyn to call Mocambo. She did it out of her desire. She wanted one of her favourite singers to sing at a historic venue, famous amongst those in Hollywood.

Ella was a very talented woman, who may have done absolutely fine without this assistance, but who knows? It may have taken much longer for her to reach such stardom. What we do know is that Marilyn made a call, and Ella was booked. Sadly, Marilyn wasn’t there but the important thing is that Ella was.

Was Ella lying? I don’t think so. Bearing in mind in 1972 when she did this interview it was 17 years since she did those shows. Marilyn had seen Ella perform live but it wasn’t on those occasions. Perhaps her memory was mixed up. Who knows! What we do know is that there was absolutely no coverage of Marilyn attending any of the shows (on the dates when she wasn’t being photographed by Ed Feingersh in NYC).

Marilyn was a supporter of the Civil Rights Movement, even without the fiction.

She had no fear of associating with people of colour or discussing acceptance of all backgrounds. She discussed civil rights in interviews too.

What I really want to say: That what the world really needs is a real feeling of kinship. Everybody: stars, laborers, Negroes, Jews, Arabs. We are all brothers.

« Marilyn ASMR: It Makes Me Goosepimply All Over!