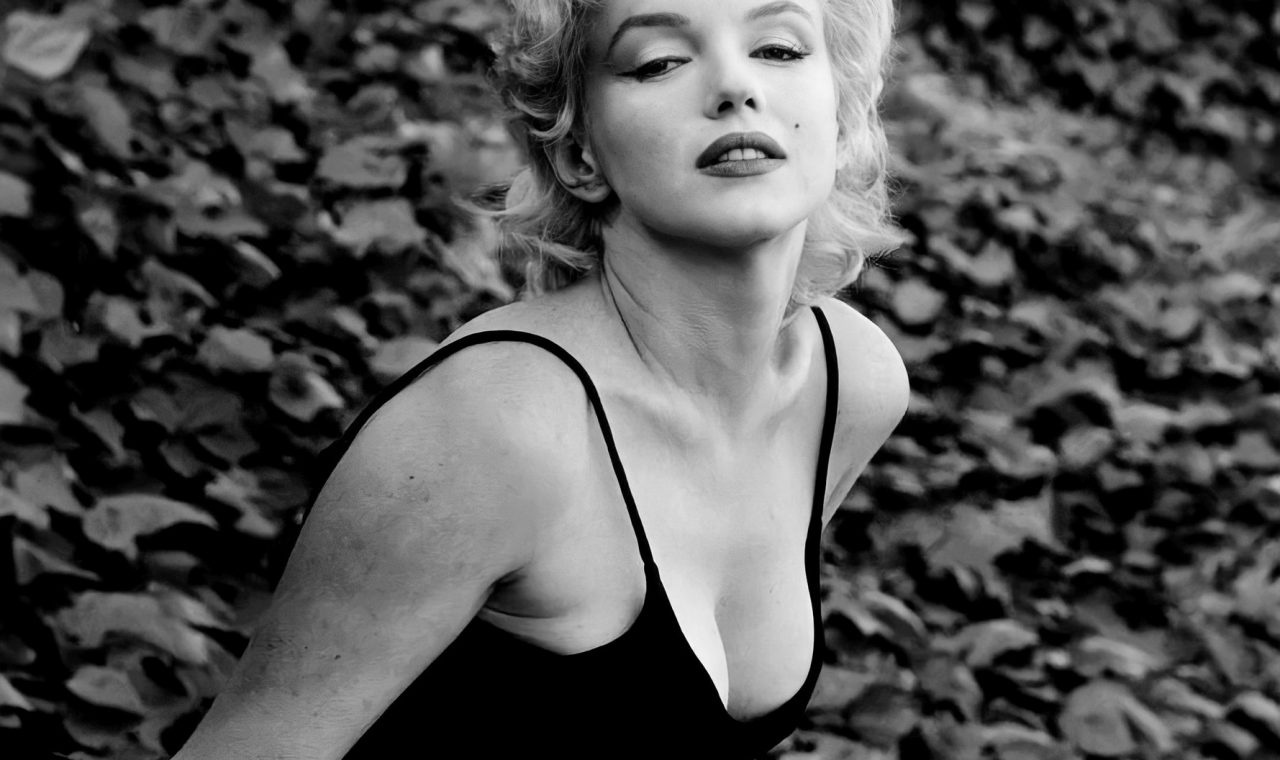 The glamorous Marilyn we see on the silver screen and on the red carpet is rather contradictory to the dressed-down Monroe that could be seen trawling bookshops or wandering the streets of New York. But that shouldn’t be surprising. No one wakes up and decides that their day-to-day attire should consist of diamonds, fur and silk… Unless you’re Elizabeth Taylor maybe, but even then I think she liked a day off… But for Marilyn, she much preferred wearing clothing for comfort as opposed to the purpose of creating fashion statements.

Now, Marilyn wore clothes from a TONNE of designers, which, for more detail, I’d recommend purchasing this book – Marilyn In Fashion and today I am going to be going discussing a couple of them but mostly we will be looking at her general taste in clothes that aren’t costumes. This will include formal wear and day-to-day. Please note, I am by no means a fashion writer and you’ll be able to tell.

THE GIRL NEXT DOOR

Marilyn’s personal wardrobe before and during her modelling (and early acting) career was minimal due to her limited budget. However, she made it work. Her “girl-next-door” look was initially crafted, almost by accident, as she began developing a shapely figure before her teens, noticing how people paid attention to her.

One morning both my white blouses were torn, and I would be late for school if I stopped to fix them. I asked one of my “sisters” in the house if she could loan me something to wear. She was my age but smaller. She loaned me a sweater.

I arrived at school just as the math class was starting. As I walked to my seat everyone stared it me as if I had suddenly grown two heads, which in a way I had. They were under my tight sweater.

The soon-to-be-star wore clothes that accentuated her shapely physique usually by displaying her midriff or wearing flattering fabrics that clung around her tiny waist and curvaceous hips all the while being innocently sweet and seemingly pure. This look was desirable, especially for pin-up and magazine photographers, helping her get modelling jobs and soon, an acting career.

As she grew from Norma Jeane to Marilyn Monroe so did her style, maturing and growing in sex appeal all the while being understated. The 1950s was Marilyn’s decade in terms of career and fashion. Ahead of her time, Marilyn’s style was both full of elegance and sensuality. While the trend of the decade consisted of full skirts and Peter Pan collars, Marilyn would purchase body-conscious pieces that showed her hourglass shape as well as plenty of her luminous skin. The paradox was, and still is, phenomenal. The plunging necklines of a monochrome dress, for example, really display how she knew to use her body to get people to pay attention, not the clothes themselves.

However, despite being a style icon today, Marilyn didn’t enjoy dressing up for fancy get-togethers…

I could never understand why important people are always so eager to dress up and come together to look at eachother.

This conveys how Marilyn wasn’t interested as much in setting trends as many believe despite being a huge inspiration within the fashion industry.

A perfect example of Marilyn’s effortless but elegant taste is through clear love for a stunning crepe, deep purple, beaded dress designed by Ceil Chapman. Marilyn wore this dress on several occasions including when she performed for troops in Korea in 1954 as well as at a party in October 1952 and at the Redbook Awards in 1953. In 1957, Marilyn even wore a white version of the dress with white gloves… she also had one in black. Needless to say, she loved this design.

Other formal dresses she wore as part of her personal wardrobe included designers such as Charles LeMaire whose suits were adorned with collars that catch the eye either with bows, white ermine trims or wide portrait designs which she would wear at dinners, press events and even on her wedding day to Joe DiMaggio.

As for luxurious fashion items, furs were Marilyn’s go-to. Even after her divorce from Joe DiMaggio, Marilyn still wore the black fur coat he gifted her. She also accessorised basic looks with a brown mink collar, now owned by Scott Fortner.

Of course, she also owned other opulent items such as Ferragamo heels and various designer clothing. However, when you look at Marilyn’s personal, formal wardrobe there are two common threads… simplicity and elegance with little (if any) flair. For Marilyn, it was as if the outfits she was wearing at these events were there simply to elevate her beauty, not be the main focus.

I believe your body should make your clothes look good – instead of using clothes to make the body conform to what is considered fashionable at the moment, distorted or not.

But Marilyn’s everyday outfits were very straightforward. Mostly consisting of white, black and beige Marilyn hardly wore anything extravagant. In fact, some of her most beautiful dresses were unlabelled including these lace sundresses. Again, looking at Christie’s ‘The Personal Property of Marilyn Monroe’ auction (linked at end of post) you can see how much Marilyn loved a LBD – timless.

As with her looks in the 1940s, Marilyn still loved patterned cropped capri pants and blue jeans. In fact, Marilyn’s favourite thing was to wear jeans:

The neutral colours of Marilyn’s wardrobe switched over in 1961. After a tough couple of years into the new decade, 1961 and 1962 brought a burst of colour to her private wardrobe.

A favourite designer of Marilyn’s was Emilio Pucci, whose bold and patterned designs made him an award-winner and style innovator. According to Susan Strasberg, Marilyn had seen a Pucci and exclaimed “Gee, if it fits on the hanger that well, imagine what it would look like on me!”. She wasn’t wrong. She had been attracted to the “wrinkle-free silk that clung” and it conveyed the new chapter in Marilyn’s life, before her untimely death. It implied she was ready for a fresh start, a clean slate which is why the George Barris photos (where she wears primarily Pucci outfits) are some of my favourites.

Marilyn was seen wearing Pucci repeatedly throughout the last two years of her life, even being buried in a green Pucci dress that she wore in Mexico as well as leaving Polyclinic Hospital in 1961 (she may have more than one). Christie’s in 1999 sold most of Marilyn’s Pucci wardrobe, displaying the items before the auction.

Famously, Marilyn’s Jean Louis gown which she wore to sing Happy Birthday to the President of the United States was personally chosen by her. Marilyn had asked Jean Louis to design a “historic” gown for the event. Ever the publicity queen Marilyn wanted to turn heads. Berniece Miracle, her half-sister, said, “Jean Louis sketched two possibilities. Both were. form-fitting. One was covered in sequins, the other rhinestones. One dipped to the waist, the other was décolleté.” Marilyn asked Berniece to choose, to which her sister replied, “Well honey, you know which side I think is your best.” Can you get any more simple than the illusion of nudity? And yet it became the most historic and expensive dress of all time. You can read more about it here.

Marilyn’s personal day-to-day style, I feel, is far more appealing than the dressed-up glamour girl we are so used to seeing. But Marilyn was no clothes-horse. She wore what she knew looked good and was a pro at crafting her image even if it seemed effortless. That never stopped her from wearing what she was comfortable in. Even if it wasn’t always polished…

Despite a few questionable style choices, there are very few occasions where people dislike Marilyn’s personal style, and for good reason. Just take a look at Christie’s 1999 auction. These items reveal what great taste she had as well as how her style changed between the 1950s and 1960s. It screams timeless. But I guarantee no one could pull those pieces off as Marilyn did. Many of the items she was never photographed in (and may have never worn), which is sad as it shows (in my opinion) that she had intentions for her future. I wonder how she’d feel if she knew what an icon she’d be today!

SOME OF MY FAVOURITE MARILYN LOOKS

What is your favourite Marilyn look?