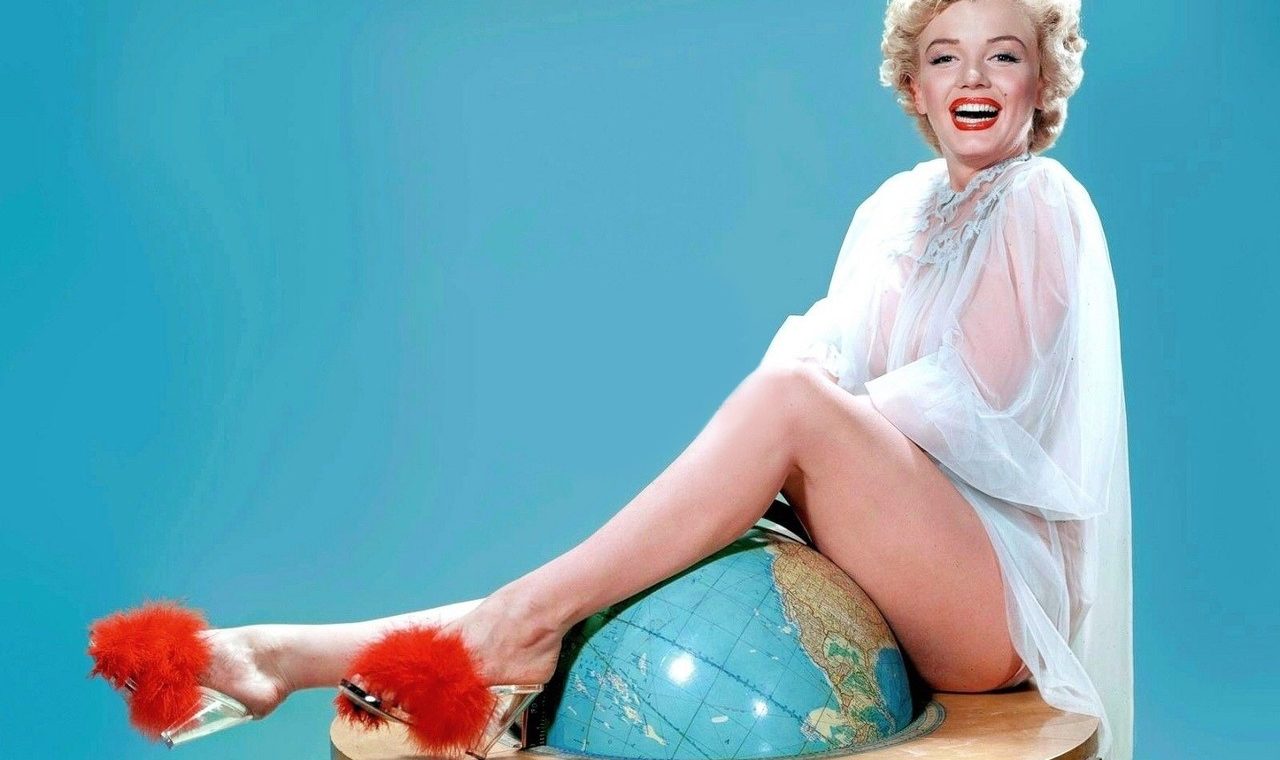 I think Marilyn is bound to make an almost overwhelming impression on the people who meet her for the first time. It is not that she is pretty, although she is of course almost incredibly pretty, but she radiates, at the same time, unbounded vitality and a kind of unbelievable innocence. I have met the same in a lion-cub, which my native servants in Africa brought me. I would not keep her, since I felt that it would in some way be wrong…I shall never forget the almost overpowering feeling of unconquerable strength and sweetness which she conveyed. I had all the wild nature of Africa amicably gazing at me with mighty playfulness.

Karen Blixen in a letter to the American author, Fleur Cowles Meyer, in 1961, as quoted in Fragments (2010), by Stanley Buchthal and Bernard Comment

I referenced things like Marilyn without trying to be accessible. I have a personal relationship with my perception of who marilyn was. She was the kind of female who was really warm and giving. I like that type of girl who’s friendly and easy. I was always looking for girls like that as friends.”

Lana Del Rey in an interview with Complex Magazine, 2014

There are people so vivid in life that they seem not to disappear when they die, and for many weeks I found myself having to come about and force myself to encounter the fact that Marilyn had ended. I realized that I still, even then, expected to meet her once more, somewhere, sometime, and maybe talk sensibly about all the foolishness we had been through — in which case I would probably have fallen in love with her again. And the iron logic of her death did not help much: I could still see her coming across the lawn, or touching something, or laughing, at the same time that I confronted the end of her as one might stand watching the sinking sun. When a reporter called asking if I would be attending her funeral in California, the very idea of a burial was outlandish, and stunned as I was, I answered without thinking, “She won’t be there.” I could hear his astonishment, but I could only hang up, it was beyond explaining.

In repose her face was at moments strangely, prophetically tragic, like the face of a beautiful ghost—a little spring-ghost, an innocent fertility daemon, the vegetation spirit that was Ophelia… quiet, with great natural dignity and extremely intelligent.”

Marilyn was one step from oblivion when I directed her in The Asphalt Jungle. I remember she impressed me more off the screen than on…there was something touching and appealing about her.”

She is a brilliant comedienne, which to me means she also is an extremely skilled actress.”

Sir Laurence Olivier, co-star in The Prince and the Showgirl (1957)

As near genius as any actress I ever knew.”

She was an absolute genius as a comedic actress, with an extraordinary sense for comedic dialogue. It was a God-given gift. Believe me, in the last fifteen years there were ten projects that came to me, and I’d start working on them and I’d think, ‘It’s not going to work, it needs Marilyn Monroe.’ Nobody else is in that orbit; everyone else is earthbound by comparison.”

Marilyn Monroe is the greatest farceuse in the business, a female Chaplin.”

Nobody discovered her, she earned her own way to stardom.”

Somewhere along the way, the image of Marilyn Monroe as superstar, as sex goddess, as legend, has been tarnished by the image of Marilyn as tragic victim. She has become Marilyn the conspiracy, with each new claim more outlandish than the one before. Flying saucers are now part of the scenario. Marilyn is too much of a good thing to disappear into this black cloud – she still has much to offer and inspire us.”

Foreword to The Ultimate Marilyn by Ernest W. Cunningham

That death, so untimely, so ambiguous, caused me terrible distress. And it got me thinking. I thought about the meaning of beauty, about loneliness, about the need to find love that’s hidden in the heart of each and every one of us. I remembered Marilyn’s seductive smile veiled with sadness. It wasn’t enough to be the most beautiful woman in the world to be happy. Marilyn had been a great actress, crushed by the weight of her own talent, by all the men who had asked her for everything without giving her anything in return, or by those who had wanted to transform her according to their own tastes. Marilyn’s allure had ended up destroying her, reducing her to an ill-fated sex symbol. She hadn’t managed to find her own way. I felt a shiver run up my spine, as if a shadow had been cast all around me. The world is a cruel place, nourished by and satisfied with appearances, rarely concerned about what lies beneath the surface. This is why it’s up to each of us to keep any fairy tale anchored to real life, so that we never forget who we are, where we come from.”

Sophia Loren, from her autobiography Yesterday, Today and Tomorrow: My Life (2014)

Once she was ready, [to be photographed] she would surpass the expectation of the lens. She had a shimmering quality like an emanation of water and she moved lyrically.”

Inge Morath, Photographer on the set of The Misfits in 1960.

Sophia Loren and Marilyn Monroe are the ones i most admire. Marilyn Monroe is fantastic, she started from nothing and thanks to her own efforts reached the top.”

Brigitte Bardot during an interview in 1957

From what I know of her, Marilyn had very human qualities.”

She was a whirling light to me then, all paradox and enticing mystery, street tough one moment then lifted by a lyrical and poetic sensitivity that few retain past early adolescence. It was an ironical summer that I will never forget, my soul only half there (at work) and exhilarated with life and at the same time ridden with guilt. I loved her as though I had loved her all my life; her pain was mine.”

I too was struggling because I could not smash her enemies with one magic stroke, our own relationship was wounded because she was beyond my reassurance, she had no means of preventing the complete unravelling of her belief in a person once a single thread was broken.”

I miss her. It was like going to the dentist, making a picture with her. It was hell at the time, but after it was over, it was wonderful.”

Marilyn had an incredible charisma that was so rare, I don’t think I’ve seen anything quite like it.”

I enjoyed her company. I enjoyed working with her.”

All I did was believe in her. She was a marvelous, loving, wonderful person I don’t think many understood.”

She listens, wants, cares. I catch her laughing across a room and I bust up. Every pore of that lovely translucent skin is alive, open every moment-even though this world could make her vulnerable to being hurt. I would rather work with her than any other actress. I adore her.”

Montgomery Clift, co-star in The Misfits

Marilyn is an expert comedienne and therefore a good actress.”

Quite simply I do not believe I would be working in the film industry if it were not for Marilyn Monroe.”

I think Marilyn knows exactly where she’s going and that it’s forward. It’s just possible that she’ll turn out to be not only the sexiest but the smartest blonde of our time.”

Her sincerity is impressive and her willingness to listen to and take advice is one of her outstanding qualities. Marilyn is wonderfully sincere in her work. She is always trying to improve and wants to do her best in every scene, yet she makes no effort to steal a scene or upstage anyone ever.”

I’ll tell you a girl I’d like to meet and that’s Marilyn Monroe. She must be a fascinating personality, considering all she has gone through. She’s taking a lot of knocks because she’s on top now. I wish there were some way I could tell her not to let it get her down.”

I think she has done a great deal of good for the movie industry. She is just what the business needed someone to put some glamour and magic back into Hollywood.”

If she stays as she is, holding her ground, being herself, she will be one of the great stars of all time.”

I think my husband has the solution: he says that nervousness indicates sensitivity and that’s what Marilyn has, great sensitivity. And then, Marilyn is still frightened, although she is overcoming it, Lee says show me an actress who isn’t frightened and nervous and will say she won’t go far.”

Marilyn has a God-given talent, really phenomenal talent. My husband says she is a combination of Jeanne Eagels and Pauline Lord. Like them, she is greatly misunderstood. Where Marilyn’s work is concerned, she wants perfection and to achieve perfection in anything is well-nigh impossible. But she constantly seeks it- even at the expense of her health and peace of mind.”