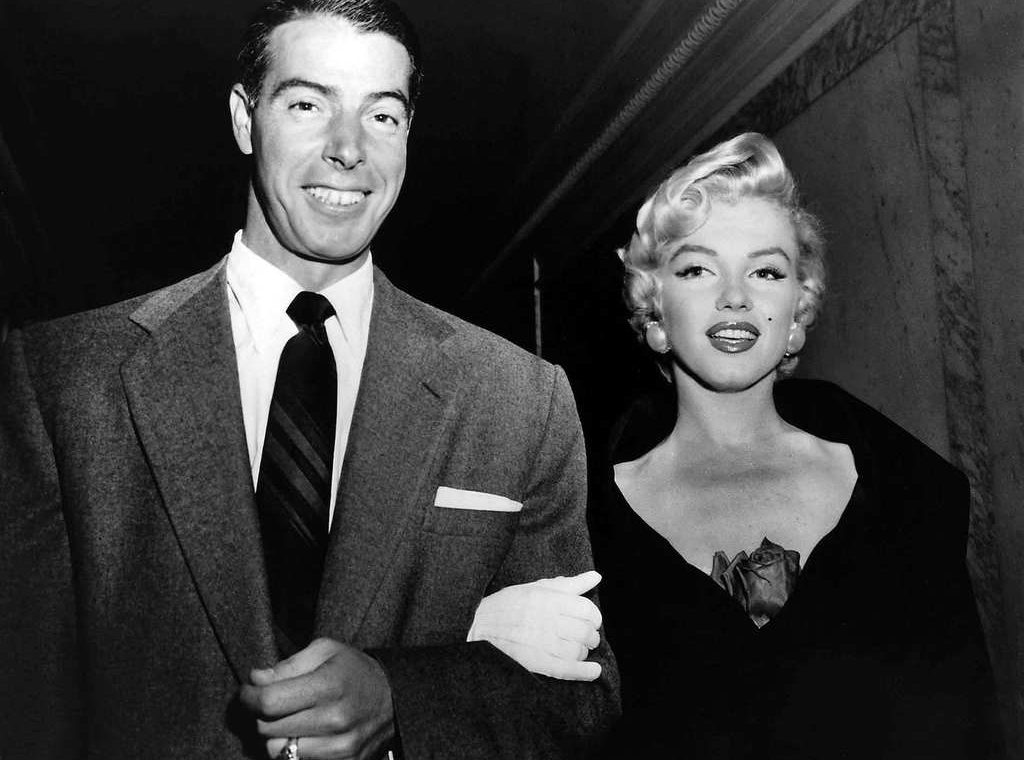 Monroe and DiMaggio. For some, it was a soulmate romance ending in tragedy, for others a toxic union. The truth? Most likely an extremely complex relationship of which the intimate details have now been taken to both graves, 36 years apart. The fascination surrounding the connection between two seemingly opposite individuals however remains.

Hopefully, this slightly unconventional retrospective is befitting to this peculiar couple and covers the many aspects of one of the most private relationships of the two most public figures of their time.

Note on sources: To preserve their voice, the correspondence, quotes and notes from Joe and Marilyn themselves have been given priority. Wherever possible quotes and documents used for this article have been limited to direct sources (i.e. people who knew Joe and/or Marilyn) to avoid issues linked to hearsay and author bias as much as possible.

Part I – “Something clicks. Like a double play combination” – Joe DiMaggio (True Magazine, 1954)

So much has been written to underline Joe and Marilyn’s personality differences, it’s hard to imagine how the two ever began a romance. And yet the above description could fit either like a glove. Their extremely short-lived marriage often overshadows two years of a cross country relationship, marred with events that relentlessly tested their commitment to each other.

“The truth is that we were very much alike.”

Marilyn Monroe to Ben Hecht for her autobiography, My Story (1974)

Born to a Sicilian catholic family in Martinez CA, Joe was one of nine children. While the meagre income from his father’s fishing boat made it incredibly difficult to rise above poverty, the sense of family was paramount to the DiMaggios. In comparison, Norma Jeane lived a childhood almost entirely removed from her own blood. This unstable environment was a struggle for Norma Jeane who never could quite fit in. Her very tall appearance earned her the sobriquet “Norma Jeane, the string bean” and the development of a stutter did not help her confidence. In this aspect Joe could relate: raised in an Italian-only speaking environment his participation in class was nonexistent. The awkward leg braces he had to wear as a child to correct weak ankles hardly made him the popular kid.

Plagued with shyness and a lack of support in their academic abilities, both dropped out of high school out of necessity: Norma Jeane married next-door neighbour Jim Dougherty to avoid returning to an orphanage, Joe was sent to work as a newspaper boy and bottled orange juice in a factory to bring money home for his large family.

This feeling of being a constant outsider isn’t something that would leave either of them. Later, as an up and coming starlet, Marilyn was expected to party and network but like many of her entourage recollects, she very much enjoyed staying home or consciously avoided being the centre of attention. Joe was rarely seen with strangers and would often remove himself from group conversations. Their common reclusive nature and childhood hardships undoubtedly created a bond which was evident to Marilyn: “he had a very difficult time growing up […] he understood some things about me and I understood some things about him and we based our marriage on that” (1960 interview with Georges Belmont).

Interestingly this connection also jumped at Norman Rosten – Marilyn’s friend and poet who would only meet Joe much later in the 1960s – “She and Joe had a similar street-smart air, a touch instinct for survival, that might have served them well in the years to come.”

Joe and Marilyn’s respective experiences of the spotlight brought a common ground through the stigmas associated with their public image. Joe’s fame came at a time when Italian names regularly made the papers for organised crime and mob associations. But his impeccable performances on the field soon made the public accept this withdrawn and aloof player whose steadfastness prevailed over ethnic preconceptions.

Marilyn’s image and the stereotypes associated with her “sexy dumb blonde” persona were also not the reality her interviewers faced. Journalists and columnists alike were often taken aback by the shrewdness and quick wit of what they expected to be another fame-hungry starlet with not much to say. [see her radio interview from 1955]

Unfortunately for Joe and Marilyn, they would find themselves in a constant struggle against prejudices associated with their background. Joe’s Italian origins were never forgotten, often painted in the worst light: racial slurs to describe him were common as were quips about his love for spaghetti. No level of fame or American hero status would prevent DiMaggio’s parents from being listed as “enemy aliens” during WWII – as Italian immigrants, his father’s boat was seized and travel restrictions meant the family was unable to visit the restaurant Joe and his brother Dom had opened. Marilyn’s own past was not something she would be allowed to escape from as she several times risked public scrutiny and humiliation: the media jumped on the now-famous Tom Kelley nude calendar images and the revelation of her mother still being alive and institutionalised.

It’s not surprising those repeated attempts at stigmatisation may have resulted in both Joe and Marilyn earning a chip on their shoulder and an increasing desire to show the press, the studios and the wider public how mistaken they were. The respect they both tried to establish would also take a financial tone. The studio contract troubles Marilyn was facing in 1953/1954 were something Joe could relate to. He had held out for his own Yankee contract, generating unfavourable press for himself quickly forgiven thanks to his success on the field. But his strong sense of self-worth is a trait Marilyn could be inspired by. She had most likely shared with him her increasing frustrations over the lack of dramatic roles (“From now on he wants her to seek out only dramatic roles”– Sir! Magazine, April 1954). As a savvy businessman, Joe would have had some advice for how Marilyn could handle this battle, mainly playing hard to get and refusing to take calls until a serious offer was made.

Fighting against media pressure and expectations also meant both Joe and Marilyn hid behind public personas: Marilyn’s joyous, sexy and charismatic front and Joe’s stoic and impassive character masked much of their personal turmoil. Marilyn could work herself into panic attacks, exacerbated by her insomnia and the self-medication to overcome her natural insecurities. Joe was not immune to feeling overwhelmed himself. Always looking coolheaded on the field, DiMaggio was a lifelong heavy smoker and coffee drinker, afflicted by extreme anxiety. During his WWII service, he was hospitalised for weeks for stomach ulcers as a result of the stress from being served with divorce papers from his wife requesting custody of their son Joe Jr.

Perhaps these personal anxieties made for a couple that relied heavily on the emotions of the other. The above letter from Marilyn shows how she could be very insecure and needy, even when her partner was only away for a few days. While she may have been vocal about her feelings, Joe’s affection for Marilyn was never for the public and displays of it were usually kept hidden from others. When travelling to Banff after Marilyn sprained her ankle, he casually told reporters waiting in Vancouver: “I’m just going to Jasper to fish”. The private pictures of this trip offer a rare glimpse of Joe’s natural self with Marilyn, including an affectionate side she clearly knew. John Vachon remains the only professional photographer to capture both Joe and Marilyn in an intimate setting.

Marilyn, when asked how many children she hoped for with Joe

Joe’s stubbornness to move away from Hollywood and settle in San Francisco to start a family can often give the impression Marilyn had no say in the matter. This is somewhat true.  Marilyn did not expect to be back working so soon after her suspension and was left with managing an impatient new husband who had hoped for a quiet start to his married life. But she also appeared to have very much manifested some interest in this life. On the set of How To Marry A Millionaire, Lauren Bacall recalled Marilyn wistfully wishing she could be with Joe in San Francisco “in some spaghetti joint”. Like many of Marilyn’s aspirations, she felt torn by them: “A career is wonderful, but you can’t curl up with it on a cold winter’s night” (Sir! USA Magazine, April 1954)

Marilyn’s desire to build a family and desire for children is not questionable. She would interestingly later compare the length of her marriage to Joe as “enough time to have a baby”. Interestingly, her character of Roslyn in The Misfits, which was somewhat inspired by Marilyn’s own experience, has a line where she claims she never wanted children with her ex-husband. Marilyn herself made note of this in her script copy, adding in pencil “just like with JD”. This could have suggested Marilyn and Joe did not attempt to have children together. However this is unlikely considering how eager Marilyn was when asked how many children the DiMaggios would have (“six!”) but also much more privately in her own letter to Joe in 1954: “I want you someday to be proud of me as a person and as your wife and as the mother of the rest of your children (Two at least! I’ve decided)”.

Journalists never held back on the matter either. Marilyn would be asked the very question on 16 April 1954, to which she candidly replied: “I’m not pregnant but I wish I were. Joe and I want a lot of little DiMaggios.” As her first day back after her work suspension, this was a very bold answer but evidently a genuine manifestation of what she desired the most: a child.

Her operation to correct endometriosis in mid-November 1954 – less than a month after their divorce announcement – indicates the couple may have already suspected they were struggling to become pregnant. Joe’s presence at her side is a strong indication this surgery would have affected both of them and their future, had it not been for their separation.

For all their shared desires, background and experiences that brought them together and could have created a successful and long-lasting relationship, there were of course a number of conflicting outlooks which the traditional and expected path of marriage would fully expose.