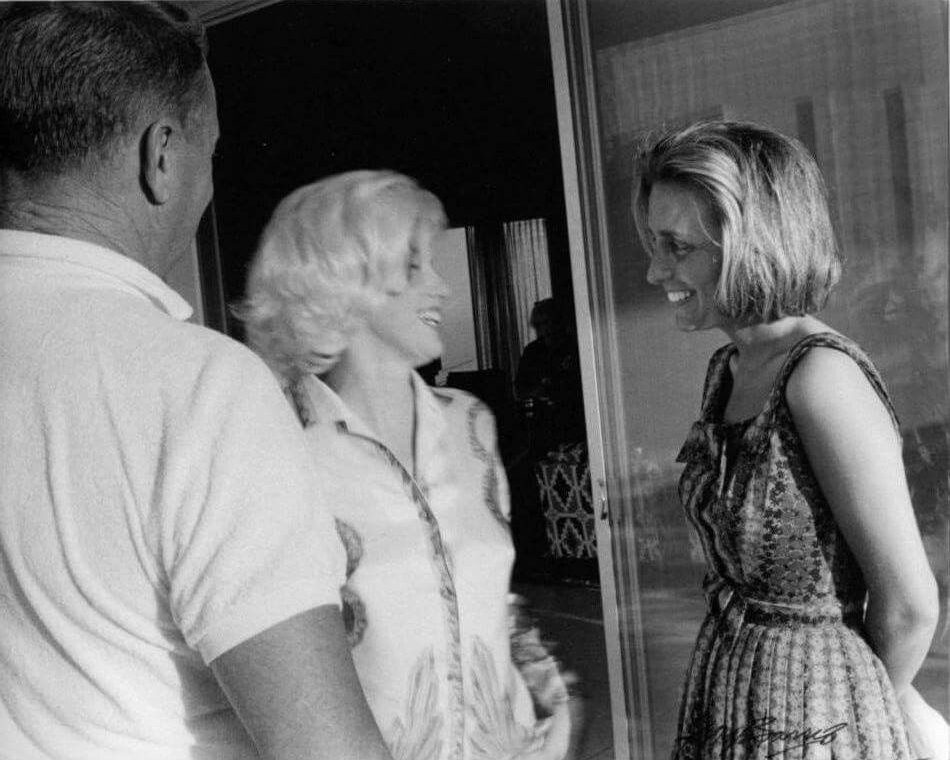 Finding reliable sources is a tricky job, especially when those sources are meant to have been friends or close in some way to Marilyn Monroe. But who within Marilyn’s circle of friends or her acquaintances can be deemed as reliable and who can’t?

This is a sensitive topic because a few of these people are still alive OR have families who are still very assured by their relative’s version of the truth. This is all completely my own opinion based on what I have read and researched. It’s important to remember with any post, I have not read every book, seen every interview etc. so some of those mentioned may have said things untrue and vice versa. But we are generally speaking when talking facts here! I don’t think all of those with stories about Marilyn are intentionally lying when they are making errors. Some definitely are but I will mention those when the time comes…

Here are some of the people that “knew” Marilyn and are therefore often immediately deemed as trustworthy sources… But are they?

It is important to remember that people’s memories, especially over time can adjust the narrative to how things really are. It’s human nature so I don’t necessarily believe that all of those who have told inaccurate stories are doing it intentionally.

Whitey knew Marilyn for over a decade and was a very good friend to her. He first did her make-up for her screen test in 1946 all the way up until 1962, showing a continuous stable relationship, one of the few she had.

Marilyn’s relationship with Whitey was beyond sweet, to say the least. He worked with her, yes but she also confided and trusted him, even asking her to do her funeral makeup if she passed away before he did. He joked and said, “sure, drop off the body whilst it’s still warm.”

Marilyn had a sense of humour, and as a joke bought him a gold money clip with the engraving, “Whitey Dear, While I’m still warm, Marilyn.” The clip sold for over $21k.

Although Marilyn and Whitey were close, he did write the foreword for Robert Slatzer’s highly questionable book not to mention he made many contentious claims about Marilyn and Slatzer’s “affair”.

He never believed Marilyn killed herself (intentionally), and is possibly one of the few people that can attest to her mental state in the final weeks of her life seeing as he knew her longer than many of her peers. He stated not long before she died, “Since her divorce from Arthur Miller, she’s been in her best condition for a long time. She’s happy!”

Whitey was a pallbearer at her funeral as well as her make-up artist, as promised.

Like Whitey, Ralph was a reliable friend who always came to Marilyn’s aid when she needed him, which turns out would be in the middle of the night or early hours of the morning.

Whilst Marilyn filmed Let’s Make Love, Ralph began giving her massages. This helped relieve her tension and insomnia. During this time she opened up to Ralph discussing relationships, politics, her body, movies and acting. Ralph became one of Marilyn’s closest friends and even played a small part in The Misfits (the ambulance driver who treats Montgomery Clift at the rodeo scene).

When Marilyn passed away Ralph wrote a memoir, Mimosa, about their friendship. Due to the content not being sensational enough, he was unable to find a publisher. Extracts from Mimosa were posted on a family website after Ralph’s own death and in November 2021 the story of their friendship was released.

Ralph and Whitey are probably two of the only people whose testimonies about Marilyn’s life I trust other than Joe and Pat (who never really said ANYTHING). They knew a side of Marilyn that many did not.

As part of his job as a columnist, Sidney would have made up some stories about Marilyn; it was his job. But it is just as likely Marilyn knew this came with the territory of being friends with a gossip columnist. Again with many articles and books by those who knew her, we need to cross reference and fact check claims. But overall Sidney’s articles and gossip snippets are quite harmless. Let’s not forget that she would be able to successfully use her friendship with Sidney as a publicity tool also!

One claim that does create some bizarre questioning is that apparently, on the day Marilyn and Joe were married, she told Sidney that she was going to marry Arthur Miller. Not a likely thing to do on your honeymoon… But still, it sells. So take his tales with a pinch of salt, unless of course, it is an actual interview.

She was a difficult woman, you know. We liked her and we said the nicest things about her and she deserved them; but, she was trouble and she brought that whole baggage of emotional difficulties of her childhood with her. “

Marilyn met Norman in 1955 through friend and photographer, Sam Shaw. He was a poet and a playwright, friends with Arthur Miller as well as Marilyn. He is one of the few people who knew about their affair before it went public and remained friends with the couple throughout their marriage.

Marilyn went on vacations with the Rostens, including their daughter Patricia and shared a special bond with the family. Marilyn had even left $5000 for Patricia’s education in her will.

Marilyn would often send her poems to Norman and even hired his wife Hedda to be an assistant. She was part of the Miller’s entourage in 1956 when they were in England.

Even after her divorce from Arthur, Marilyn and the Rostens remained friendly.

They knew the real Marilyn, the side of her that wasn’t dripping in jewels or coiffured. They knew the sensitive woman who wished to fit in with intellectuals and poets, not the movie stars. The Rostens, again, had no sensationalized tale about their friend, only stories about her very human qualities.

At the core of her, she was really strong… and that was something  we tended to forget, because she seemed so vulnerable, and one always felt it necessary to watch out for her.”

Pat Newcomb worked for Marilyn briefly in 1956 during the filming of Bus Stop. There were rumours of an alleged falling out but in 1960 when Rupert Allan (Marilyn’s publicist) moved to Monaco to represent Princess Grace, he was replaced with Pat with no objections.

Marilyn was very generous to Pat, gifting her a mink coat and a car. Pat in turn was there for Marilyn as more than a publicist but as a friend, staying by her side through some of her toughest times including her divorce from Arthur Miller.

Pat had shared her opinions on the likes of Greenson and Eunice Murray, complaining they were too interfering and controlling of Marilyn, being frank and honest about Marilyn’s wellbeing. However, Pat is most well known for being with Marilyn on her last day alive, before Greenson had told her to go home.

When Pat had discovered news of Marilyn’s passing she went to the property in Brentwood still in her pyjamas, and screamed at photographers “Keep shooting, vultures!”

When asked how she was feeling, Pat retorted, “How would you feel if your best friend died?”

Despite working tirelessly to field press inquiries the Arthur Jacobs agency had decided to fire her due to her outburst.

Pat is particularly private and has only discussed Marilyn, her last day alive and their relationship briefly. But it’s clear from what she has said and how devoted she was to Marilyn, that their friendship was genuine.

It’s my feeling that Marilyn looked forward to her tomorrows.

Eunice Murray was hired by Ralph Greenson in 1961 as Marilyn’s housekeeper and, many say, “spy”. She would report Marilyn’s coming and goings as well as who called and who she called to the man who hired her (although Marilyn was the one who paid her salary).

Mrs Murray, like Marilyn, was incredibly dependent on Greenson due to her own personal insecurities and messy past.

It is widely believed Marilyn was going to relieve Murray from her duties the day she died, as well as Greenson, hence the rumour that perhaps they were responsible for her death… However, it would seem counterproductive to murder someone if you wanted to stay employed by them and it’s unlikely they would’ve pursued this action as a form of revenge. The likely situation is that due to Murray wanting to travel that summer, Marilyn dismissed her and wrote her a cheque. It is indeed rumoured she was distancing herself from those she depended on and Greenson may have upset her that afternoon in his attempts to dissuade her, but this will remain a mystery and cannot be up for debate.

But can Mrs Murray be trusted? Well, I feel Eunice has only really had opportunities to discuss Marilyn’s death (considering she was the one in the house with her) and not much else. Her opinion and her relationship with Marilyn will be defined by that factor alone. She was an elderly woman, who may just have gotten the information incorrect or confused about Marilyn’s death. It’s also likely she wanted to protect Greenson from his negligence (although it was Engleberg who prescribed the drugs). Again, due to her devotion to Greenson more than Marilyn and her confusion and grief, I wouldn’t say she was a reliable source. She was never consistent with her statements regarding Marilyn’s death, and over the years just went along with the popular theory of that decade.

Jeanne Carmen was an actress who later came to biographer Anthony Summers stating she was Marilyn’s best friend. As well as Robert Slatzer, Summers’ book is largely based on their testimony. A major red flag… Why did he not check their claims?

She claimed Marilyn knew mobsters, that she herself met Bobby Kennedy (no records, dates or general proof of this) and that they lived in the same street (again, no records)… This list goes on.

Jeanne never even met Marilyn Monroe. There is no reference to Jeanne in Marilyn’s possessions such as letters, phone books, or photos and there’s no mention in any press clippings. There is no proof Marilyn even knew who she was let alone were best friends. She claims all of her photos of her with Marilyn were lost in a fire… sounds fake, right? You can read more about Jeanne Carmen here.

So, can she be trusted?

« The Life of Marilyn Monroe