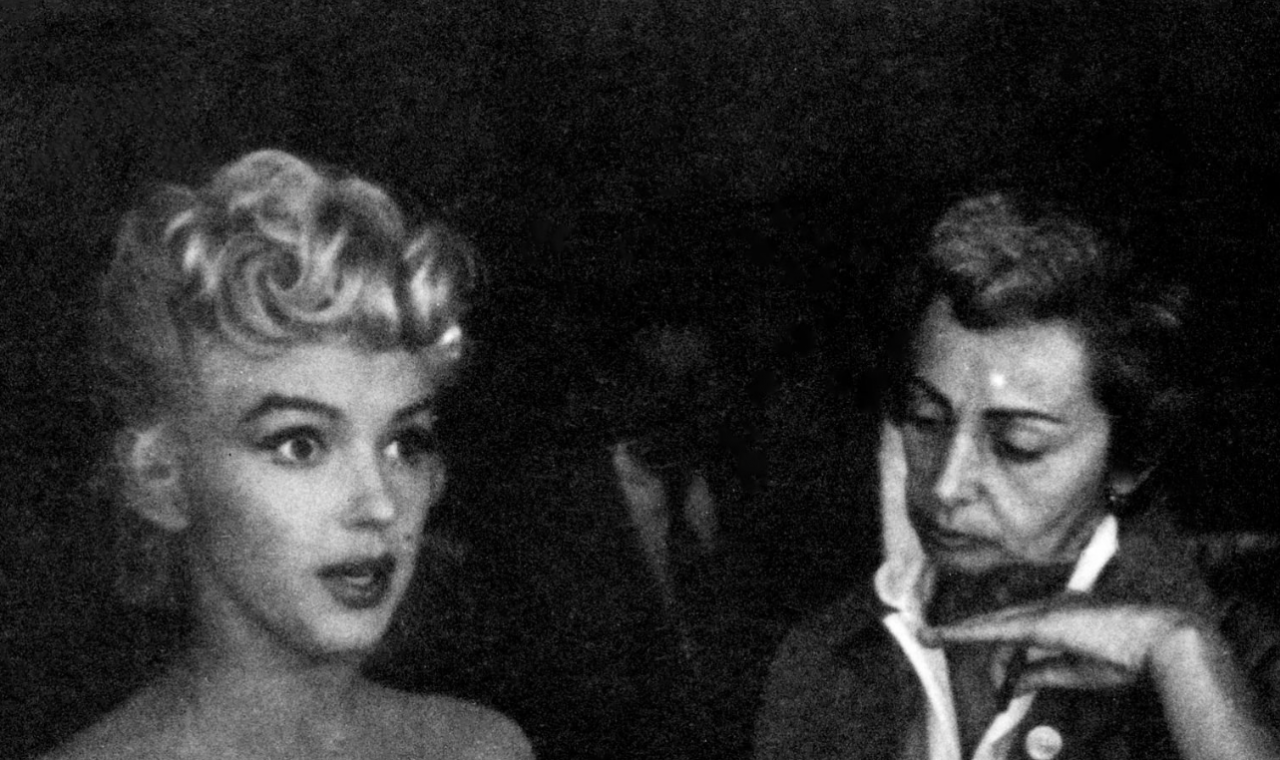 Read almost any biography on Marilyn and you will find Natasha Lytess’s name. Why? If you were to ask Natasha she’d claim it is because she made Marilyn famous. You will also read how after more than 20 pictures together, Marilyn cruelly shunned her acting coach of eight years. But was it really like that? Did Marilyn simply cut off someone who had supported her for almost a decade?

Natasha Lytess aka Natalia Postmann was born in Berlin and immigrated to Los Angeles after the Nazis came to power in Germany.

After failing at her own acting career in the States, she became a drama coach with students such as Mamie Van Doren and Virginia Leith.

In April 1948, she was assigned a new student at Columbia pictures where she was employed. The starlet was working for six months at the studio and had been offered acting classes. The 21-year-old, whom she described as, “in a shell” had a voice that “voice got on my nerves” was Marilyn Monroe.

Natasha began working with Marilyn in 1948, for her supporting role in Ladies of the Chorus teaching her how to talk and act on screen.

After their first movie together, Natasha started to give Marilyn private and intensive coaching prior to all her auditions. They worked three days and nights a week rehearsing for The Asphalt Jungle (1950) and when Marilyn got the part, Lytess quit her role at Columbia to coach Marilyn full-time.

John Huston was the first of Marilyn’s directors to have Natasha guide Marilyn through almost every scene. Dealing with her reliance on her drama coach was a habit which he witnessed again in 1960 when directing her in The Misfits.

Many directors who worked with Marilyn throughout the years experienced immense frustration when she would often turn to her dramatic coaches for approval (or disapproval) as opposed to the directors themselves. You can witness her glance over at Natasha at approximately 1:10 in this scene.

Jean Negulesco became so frustrated from shooting retakes, he banned Natasha from the set of How to Marry a Millionaire. However, Marilyn refused to work without her present feeling as if without Nattasha she wouldn’t be able to perform. He relented and Natasha was back, sitting next to or closely behind Negulesco shaking her head when she disapproved of a scene, causing Marilyn to call for another take.

Billy Wilder would end up telling Natasha what he wanted from Marilyn and who would relay it to the actress. This early habit became an occupational hazard for directors in years to come, sabotaging many of Marilyn’s business and personal relationships. This style of working would provide a sense of dread for the cast and crew who worked with her as having the coaches on set was more of a hindrance than a benefit to her acting and confidence.

In the fall of 1950, Marilyn moved in with Natasha, her daughter and maid where she and her coach could work continuously on her craft. However, this was undoubtedly a confined lifestyle for Marilyn, giving her little time for herself or anyone else.

Stories have been released over the years, even from Natasha herself, implying that there was a romantic relationship between the two. “I took her in my arms one day, and I told her ‘I want to love you.’ I remember she looked at me and said, ‘You don’t have to love me, Natasha – just as long as you work with me.’”

This claim is contrasted by the fact that Natasha admitted to not finding Marilyn beautiful and that she had had a face “as wooden as a ventriloquist’s dummy… She was tense and apprehensive, utterly unsure of herself.”

Marilyn stated in her autobiography, My Story, that she was most certainly heterosexual, “Now having fallen in love, I knew what I was. It wasn’t a lesbian.”

When Marilyn’s agent Johnny Hyde died, Marilyn sold her mink stole that he gifted her in order to help Natasha financially whilst still paying Natasha for private tutoring. Natasha earned $500 a week, plus $250 for the private courses she gave to Marilyn, meaning she was making more money than her student. In 1951, Marilyn asked the William Morris agency for a $200 deduction in her monthly salary from 20th Century Fox so that she may cover a dental bill of $1,800 for Natasha.

Despite being closely monitored by Natasha, in 1952, Marilyn had begun dating Joe DiMaggio, much to Natasha’s dismay, and she wasn’t afraid to say how she felt about the baseball star. Natasha “disliked him at once. He is a man with a closed, vapid look.”

This opinion however didn’t phase Marilyn, who went on to marry Joe “the often morose baseball star-with-muscles” in 1954. It was after the completion of The Seven Year Itch that year that Marilyn stopped taking Natasha’s calls and refused to see the woman who was her “only protection in the world”.

OUT WITH THE OLD

Marilyn had been belittled and exploited by Natasha for eight years before she finally broke off their relationship – both working and personal.

In 1952, when she was still working with Marilyn, she openly admitted “She was very inhibited” and “unable to take refuge in her own insignificance”. Despite her student being “insignificant” and that she would be “easily forgotten”, Natasha had no qualms when it came to talking about her to newspapers and gossip columnists.

It isn’t a surprise that Marilyn had reached the end of her tether with Natasha by the end of 1954. As a private person, Marilyn wasn’t a fan of discussing her personal life with the media. However, Lytess felt zero shame in doing it for her, using Marilyn’s name as a gateway for her own publicity. For example, in 1954, she was a secret guest on What’s My Line? as Marilyn’s dramatic coach. One has to wonder if she asked Marilyn’s permission to appear on the show or whether she did out of her own desire to be known as the woman who “put the world at her feet”.

Not only did Natasha seem to control Marilyn on set but the relationship was borderline obsessive. “I created this girl – I fought for her… I am her private property, she knows that. Her faith and security are mine.”

It is said and can be believed based on patterns of behaviour, that the driving force behind the end of the relationship was Natasha planning on writing a book about Marilyn.

Many have blamed Joe DiMaggio for this professional break-up and that he attempted to drive a wedge between Marilyn and Natasha. However, the couple split up soon after The Seven Year Itch was completed. If Marilyn had felt the need for support during the divorce proceedings, Natasha would’ve been the first person by her side.

Alas, Marilyn had completely shunned her former teacher and was in the process of divorcing the man Lytess openly loathed. Marilyn was ready to head East leaving Hollywood, Natasha and her marriage behind her. She wanted to start afresh.

In March 1955, Natasha spoke with columnist Hedda Hopper stating she hadn’t “heard a peep” from the star.

Although listed as an anonymous source, it can only be assumed that it was Natasha who spoke to Steven Cronin for an article titled The Storm About Monroe. The “one of the few women in Hollywood who has worked with Marilyn closely for many years” can only be Lytess because who else? This source stated “Marilyn Monroe doesn’t know her own mind” and was “unhappy while she was married to Joe DiMaggio”. The piece continues to drive at Marilyn’s miserable marriage which clarifies that Natasha was still happy to continue discussing private matters that weren’t hers to divulge.

Despite Natasha’s years of catty remarks, Marilyn kept her opinions of the dramatic coach to herself.

Despite not talking to Marilyn for half a decade, Natasha couldn’t seem to let Marilyn go. In 1960, researcher Jane Wilkie spoke to Natasha and ended up not publishing Lytess’s manuscript which did nothing but complain about her former pupil.

In 1962, Natasha had written yet another memoir which she sold for $10,000. Marilyn’s press agents attempted to purchase it back from France-Dimanche but the publishers said they’ll make more money by keeping it. The first article was entitled “Marilyn Monroe: Her Secret Life, I Made Her – Body and Soul.” As suggested by the title, the article is nothing but the ramblings of a woman who is obsessed with the sex life of Marilyn Monroe. The articles were published on 15, 22 and 29 July 1962, weeks before Marilyn passed away. The fourth instalment was published on the day Marilyn had been found dead in her home.

However, Natasha didn’t stop her verbal abuse. She continued writing about Marilyn after the 5 August, discussing Marilyn’s death and why she had killed herself… And it was all because of men and how they viewed her as nothing but a sexual object. The article never portrayed any sadness for Marilyn’s passing, just more bitterness.

In 1964, before passing away from cancer, Natasha said “I wish I had one-tenth of Marilyn’s cleverness. The truth is, my life and my feelings were very much in her hands. I was the older one, the teacher, but she knew the depth of my attachment to her, and she exploited those feelings as only a beautiful younger person can. She said she was the needy one. Alas, it was the reverse. My life with her was a constant denial of myself.” This backhanded compliment demonstrates her relentless resentment and disdain which lasted for over ten years.

Natasha continued her belittling remarks about Marilyn long after their communications had ended, and was obsessed with Marilyn’s sexual habits, love life, fame and career. This was her pathetic attempt to give herself some sense of purpose and to be recognised as somebody when really, all she did was exploit her student.