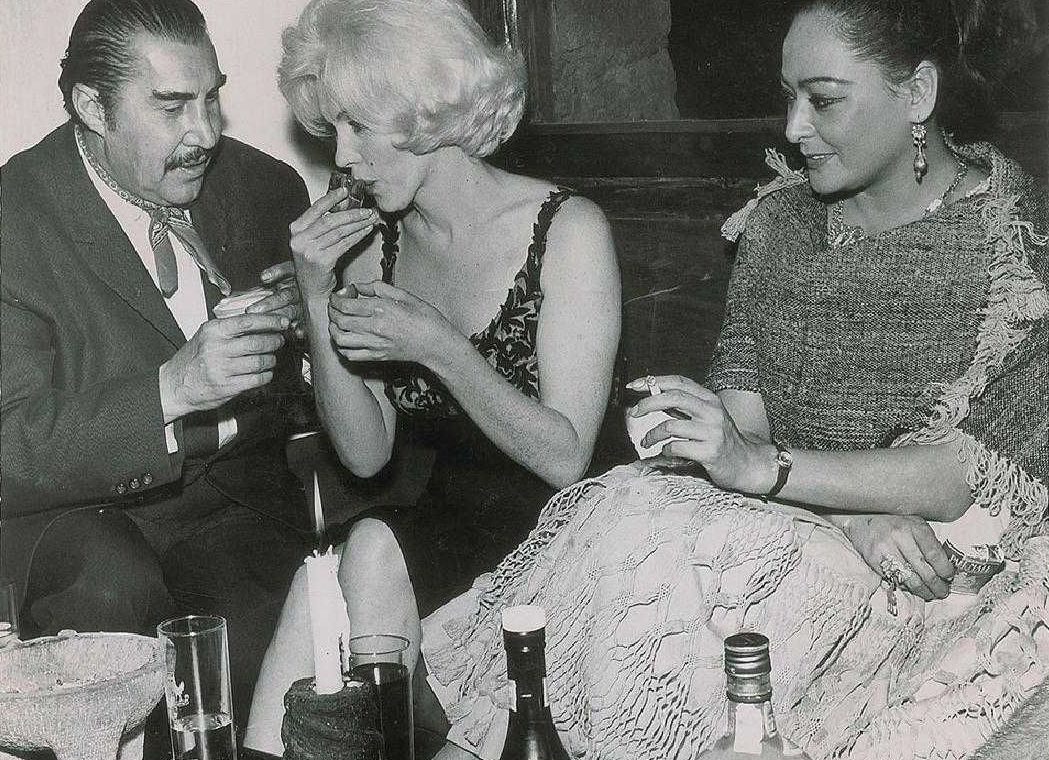 The short answer? No.

The long answer? Well, we need to explore Marilyn’s family history (briefly, as it is LONG) and where her relatives came from.

Looking at her confusing and somewhat dysfunctional family tree, I would imagine, could lead to many identity issues and a feeling of confusion as to one’s true self.

It’s also understandable to see why Marilyn had trust and loyalty issues as it was as if she had been lied to her entire life and left to feel unwanted.

This must have also been a terrible strain on her and her marriages. To attempt to create a secure family life for herself would have been terrifying considering she didn’t know what that was or what it felt like. This conflict must’ve haunted Marilyn her whole adult life. Wanting to create a family environment but not knowing how.

Alas, here is a rundown on Marilyn’s family which conveys how Marilyn was by no means from Mexico or had any Mexican heritage.

Norma Jeane’s grandparents on her mother’s side were Otis Elmer Monroe, born in Indiana and Della-Mae Hogan who was born in Missouri. Marilyn had claimed that her grandmother was from Dublin and her grandfather from Scotland, although searching through Ancestry, there is no documentation showing this. The couple was married in 1899 before they moved to Mexico in 1901 so Otis could work on the Mexican National Railway.

Their first child, Gladys Pearl Monroe, would be born in Piedras Negras with the family moving back to Los Angeles the following year. This is the only connection between Marilyn and Mexico, other than a couple of vacations there and having Jose Bolanos go to the Golden Globes with her.

Otis died in hospital in 1909 following a diagnosis of General Paresis. Della married Lyle Arthur Graves in 1912 but divorced two years later. She met Charles Grainger in 1917 and, although they never officially married, she referred to herself as Mrs Grainger. Della died in August 1927 from myocarditis. Her death certificate also mentioned psychosis which was brought on due to a lack of oxygen to the brain.

Gladys suffered from mental health issues, likely caused by exhaustion, malnutrition, incorrect medication and inhaling chemicals in the cutting room where she worked.

After she was born, Norma Jeane was fostered by Ida and Wayne Bolender but Gladys kept close. She attempted to provide for Norma Jeane as much as she could, even eventually buying a home for them to share. However, due to a nervous breakdown, Norma Jeane was back in care until she married James Dougherty when she was sixteen. Gladys was in and out of hospitals for the majority of Marilyn’s life. They didn’t share a close bond but Marilyn always made sure she was cared for. She died in 1984.

Although it is often said that Marilyn didn’t know who her father was, she always knew that it was Charles Stanley Gifford. However, it wasn’t publicly confirmed until 2022 via DNA testing. You can read about the documentary that explores this here.

Gifford was born to Fredrick Almy Gifford from Massachusetts and Elizabeth Easton Tennant from Rhode Island. He had previously been married to Lillian and fathered two children with her. They officially divorced in 1925, the same year he and Gladys conceived Norma Jeane. Gifford strongly denied he was the father and had supposedly offered Gladys money to keep quiet.

Marilyn later said, “He [Gifford] told my mother that she should be glad she was married to Ed Mortensen – at least she could give the baby his name.”

Note: Marilyn is quoted in Life in Her Own Words, that Gladys was willing to divorce Mortensen. Despite being separated, the couple didn’t officially divorce until 1928.

Gladys had been dating other men, including Gifford, after her separation and many believed she would not know who the father was due to being so sexually active.

Marilyn told George Barris in 1962: “He left my mother when he heard from her that I was on the way. His name: Stanley Gifford. I was their love child… Even when I became a successful movie star, he still refused to acknowledge me.”

Marilyn recalled, “I was always told my father was killed in a car crash in New York before I was born. Strangely enough, on my birth certificate under my father’s occupation, there’s the word, ‘baker,’ which is the name of my mother’s first husband. When I was born, illegitimate, as I said, mother had to give me a name. She was just trying to think quickly I guess, and said ‘Baker.'”

As she grew, Norma Jeane had seen images of Gifford in her mother’s apartment and likened him to Clark Gable. In 1960, Marilyn said, “Clark Gable, I’m sure he won’t mind if I say it because, in a Freudian sense, it’s supposed to be very good. I used to always think of him as my father. I was just seven years old and he was a very young man and I thought that’s how I’d want my father to look.” Marilyn would meet Gable in 1954 and would both star in their last completed film together, The Misfits (1961).

According to Marilyn’s half-sister Berniece, Marilyn met her biological father in 1961 whilst she was in the hospital (likely after her gall bladder surgery). Berniece mentions, “I don’t know how he came to be there, what the reason was that he finally revealed himself to. her, whether he came on his own initiative, or whether she asked him to come. She never got that far into the conversation. She kept breaking off.” My Sister Marilyn conveys Marilyn as being private as to her father’s identity, making Berniece promise not to reveal who he is. Despite this, as mentioned further up the page, she confided the information to George Barris for the book they were to work on together. She may have changed her mind by this point but there is no doubt in my mind that Marilyn wasn’t aware of who her father was.

Marilyn Monroe was born Norma Jeane Mortenson (more on her surname later) on the 1 June 1962 in Los Angeles, California. She was the third of Gladys’s children. The first two (Robert Kermit Baker aka Jackie and Berniece Baker) had been born to Gladys and her first husband John Newton “Jasper” Baker. The couple had been divorced since 1922.

It’s said, when Jackie was just a toddler, he retrieved a broken bottle from a trash can and lost an eye. Berniece claims he lit a firecracker and that is how he lost his eye. He later fell out of an open-top car whilst his parents argued, injuring his hip. He additionally was diagnosed with tuberculosis of the bone. In 1923, when Jasper was seeing the children for the weekend, he kidnapped them, taking them to Kentucky. When Gladys travelled East to retrieve them, she was told Jackie was in the hospital due to complications with his hip and she was not to see him or Berniece. Gladys stayed and got a job in Louisville until her son recovered. According to Berniece, Gladys, instead of saying goodbye to her children, argued with Jasper. Marilyn said of the event, “She went away and let them to enjoy a happier life than she could give them.”

In August 1933 Jackie’s kidneys failed and he died at the age of fourteen, never meeting his baby sister. Berniece would discover she had another sibling through Grace Goddard (Gladys’s friend) when she was nineteen years old (winter of 1938). They began writing and sending photos, becoming good friends. Norma Jeane and Berniece met for the first time in the autumn of 1944.

They kept in touch via letters and phone calls, meeting occasionally along with Berniece’s daughter Mona Rae and her husband Paris Miracle. However, due to Marilyn’s fame and wanting to keep her sister out of the limelight, they keep visits to a minimum.

On hearing about Marilyn’s death Berniece said, “I held back from collapsing, I was numb.” She confirmed she wanted Marilyn’s body to be released to Joe DiMaggio (whom Berniece had met in 1961). She said he asked if he could help with the funeral arrangements (along with Inez Melson) to which she agreed. When she arrived in LA she was relieved to have Joe’s help. “I relied on Joe for comfort. I was so thankful to have him there to help me cope with the situation, even though we were under great emotional stress.”

WHAT’S IN A NAME?

Norma Jeane’s biological parents were Gladys Pearl Monroe and Charles Stanley Gifford. However, the birth certificate stated Martin Edward Mortenson (incorrectly spelt) as the father. Gladys Monroe and Edward “Ed” Mortensen had married in October 1924 but she left just four months later. In about March 1926, Gladys told Stanley Gifford she was pregnant with his child whom she gave birth to three months later.

Norma Jeane would be baptised as Baker to hide the illegitimacy, despite Gladys no longer being married to Jasper Baker. Technically, if she were to take her father’s surname, she would be Norma Jeane Gifford.

In 1946, Norma Jeane began using the pseudonym Marilyn Monroe for her modelling and acting career.

In July that year, she would divorce Jimmy but keep his name until she married Joe DiMaggio in January 1954.

On 12 March 1956, she legally changed her name to Marilyn Monroe. But this would remain for only a few months as she married Arthur Miller in July 1956 thus becoming Marilyn Monroe Miller. That was until their divorce in November 1960 when she returned to Marilyn Monroe… Phew!

There we go! A brief history of Marilyn’s family tree and how she was not of Mexican lineage... Don’t believe everything you see on TikTok.