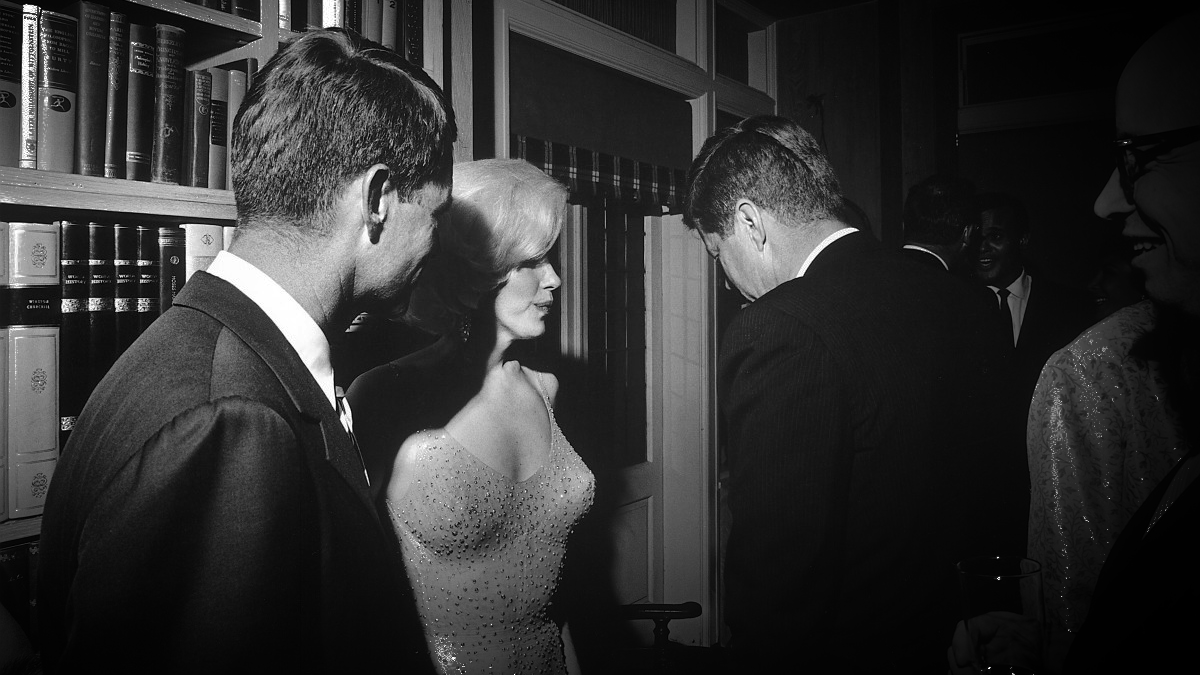 Over the years certain stories come back around, despite being proven as incorrect. The story of Marilyn, JFK and a gold Rolex is absolutely no exception.

I hadn’t heard the story for a long time, because (for me anyway) the matter was well and truly put to bed. But it came to my attention that on Instagram, there was a post made stating Marilyn was photographed at John F. Kennedy’s birthday gala holding a watch. The watch was a personally inscribed watch for the President of the United States of America.

This is the photo in question:

Apparently inside the watch case was a poem which read:

A Heartfelt Plea on Your Birthday.

“Let lovers breathe their sighs
And roses bloom and music sound
Let passion burn on lips and eyes
And pleasures merry world go round
Let golden sunshine flood the sky
And let me love
Or let me die!”

So, what is the problem?

Firstly, when I had commented on said Instagram post (which claimed that Marilyn was very clever in concealing the watch in her hand), informing the owner that there was no watch and the one sold was a fake, comments were removed and switched off.

An Instagram Story was later made stating that research had been done, and other images showed the watch. The page owner also said that although it is possible the watch sold in 2005 may have been fake BUT Marilyn was definitely holding a watch that she gave to the president. Case closed… But not for me! Although I knew it wasn’t a Rolex, I was interested in what it really was…

The matter was not addressed again except by me as I am a fan of hard evidence. I blocked that account purely out of other frustrations including not admitting when a mistake was made.

Firstly, let’s discuss the watch that was sold…

It was sold in 2005 for $120k by Alexander Autographs. A lot of money. But if real, the secret Rolex, which was owned by a US President, given by his supposed lover (aka one of the most famous women to walk this planet) it would have sold for a lot more. The reason why it didn’t sell for the REAL big bucks? Well, people just couldn’t tell if it was authentic.

When checking this, the watch’s manufacture date is around 1966. Three years after JFK was killed.

Therefore, the watch that was sold certainly was not real and never belonged to JFK.

SO, WHAT WAS SHE HOLDING? IT MAY HAVE STILL BEEN A WATCH!

As exciting as a secret gift may be in concept, Marilyn carrying around a valuable watch to slip into the President’s hand wouldn’t have gone unnoticed. In addition, such a gift would be presented in a case or at least wrapped. However, she carried an object around in a napkin most of the night.

Of course, it not being in a case and no one witnessing the sneaky transfer isn’t evidence, it’s speculation. But what evidence we do have is that in 1962 Marilyn never purchased a watch.

Scott Fortner from Marilyn Monroe Collection owns the statements from 1962, which contain details of the tickets she bought for the gala, the dress, extra beadwork, hair styling etc. But no watch. You can see the financial records here. Thank you to Scott for letting me know!

The photo earlier of Marilyn with the Kennedy brothers as with the below photo, are not REALLY evidence she had a watch in her hand.

Unfortunately, it is evidence that shows the item Marilyn was holding, was definitely not a watch.

After some discussion on Marilyn Remembered Facebook page, Gary Vitacco-Robles (Marilyn biographer) referenced that Marilyn was possibly holding a chess piece. It rang a bell!

After some digging and reading, I remembered that Eunice Murray (Marilyn’s housekeeper) had said that Marilyn was nervous about her performance at the Gala. In Eunice’s 1975 book she stated, “Marilyn took a handsome chess piece from the set she had bought in Mexico – one knight to wrap in her handkerchief while she sang. A friend [Dr. Greenson] had suggested she take it and pretend he was right there with her to lend her courage. Marilyn… lost it somewhere in New York.”

Her psychoanalyst Ralph Greenson mentioned in his 1974 paper On Transitional Objects and Transference:

“… she had discovered something that would tide her over my absence. It was not some insight, not a new personal relationship, it was a chess piece. The young woman had recently been given a gift of a carved ivory chess set.” He didn’t mentioned Marilyn’s name but referred to his patient. The timing of the events mentioned in the paper also coincidentally coincides with events in Marilyn’s life too.

Marilyn had recently purchased a gold and silver chess set (not ivory and not gifted) from Mexico in February of that year, so this aligns nicely with Eunice’s story and back up the chess piece scenario. You can see Marilyn’s chess set in the photo below taken after Marilyn passed away in August 1962.

WHERE IS THE CHESS SET NOW?

Other than the above image, the final inventory after her death and the references by Murray and the insinuation of Marilyn taking a chess piece by Greenson (also referenced in a few other biographies), there are no other records that I can find of Marilyn’s chess set from after her death. I have searched both Christie’s and Julien’s websites (and catalogues with the help of some pals), resulting in me emailing the auction houses, to confirm whether they had ever sold this item.

They both responded very quickly and politely stating they had no records of this item. So, it is safe to say it is probably safe and sound with Anna Strasberg (Lee Strasberg’s third wife), possibly with a silver White Knight chess piece missing.

Should I ever come across the chess set in future, I will update you!

The Instagram account that is making these claims is declaring it definitely is not a chess piece (Hint: It is) and won’t back down. Sadly this person is very well known to not accept when a mistake is made.

Marilyn can be seen holding it in her right hand. It’s possible that Marilyn asked Isidore to hold the piece for her at times. Or she put it in her coat pocket. Also, this image is of them GOING to the event, not leaving. I. do have to laugh and I am sorry if I sound mean but I don’t like being told I am wrong about something when I have ACTUAL evidence to back up my argument.

« The Unspoken “Rules” of Owning a Marilyn Monroe Fan Account

Being a Biographer – Michelle Morgan »