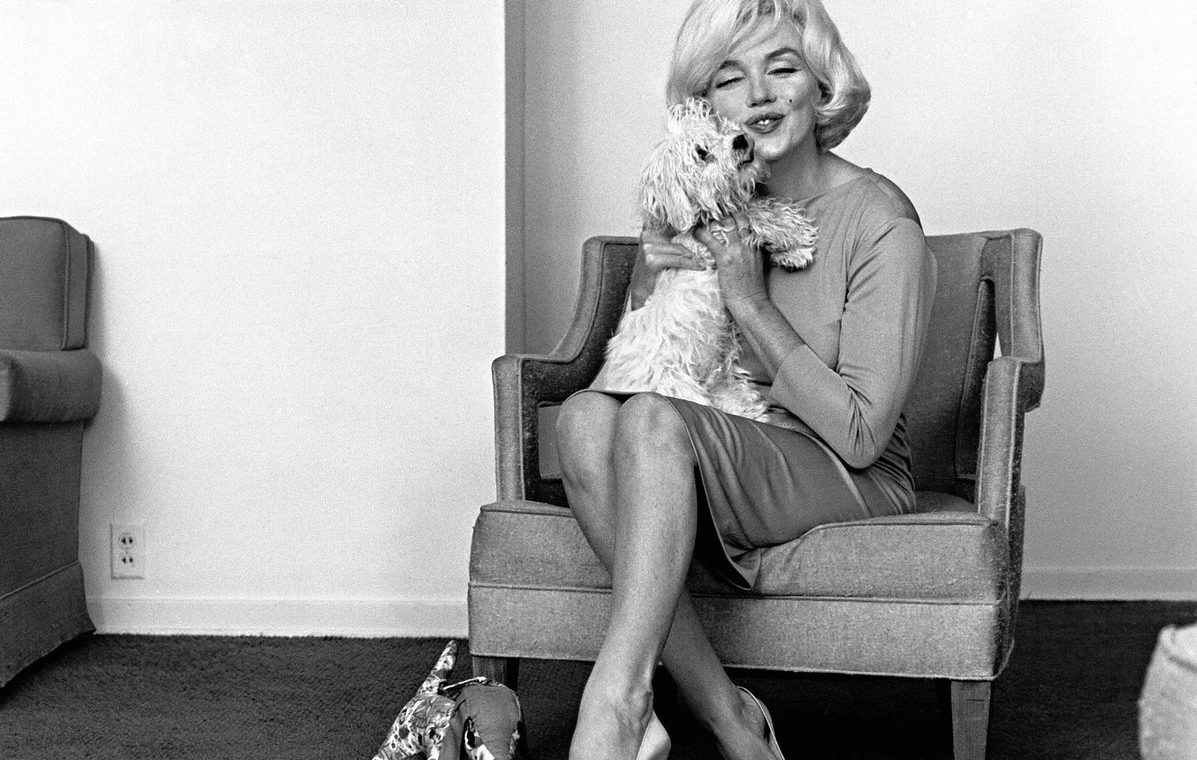 When you Google search “Marilyn Monroe’s Pets” it’s very obvious that she wasn’t afraid of dogs! From a young age, Marilyn was incredibly affectionate towards animals. Her first husband, James Dougherty said that Norma Jeane loved animals so much that she had been upset about seeing a cow in the rain. She had even tried bringing it to the house. Needless to say, Jim denied this request.

Over the years Marilyn came to own many pets, all of which she adored.

Tippy, next to Marilyn’s last pet, is possibly the most well-known.

Tippy was a black and white mixed breed dog adopted by Norma Jeane in 1931 whilst she was living with her foster family, Albert and Ida Bolender. He was the centre of the little girl’s world. Unfortunately in 1933, Tippy was killed, traumatising the child.

There are two speculations on his death. One was that he was hit by a car, which is what a Bolender relative had told Norma Jeane. Another was that because of his barking, a neighbour shot him in the head. The latter was told by Ida to give comfort to Norma Jeane that he died instantaneously and with little pain.

Either way, it is said Norma Jeane had found the body on the driveway where Ida had kept him until her husband returned home to proceed with the burial.

In 1943, whilst married to James Dougherty, Norma Jeane adopted a stray Collie named Muggsy. They lived in a two-bedroom apartment in Avalon, a place where Norma Jeane had few friends. Muggsy made a good companion whilst Jim was working with the Merchant Marines.

In 1945, Norma Jeane had started taking her modelling career more seriously, something her mother-in-law had criticised. Norma Jeane had been living with Ethel Dougherty whilst Jim was travelling since 1944 but Norma Jeane left her and Muggsy to live with Aunt Ana Lower.

Josefina was gifted to Marilyn Monroe in 1950 for her twenty-third birthday by the chairman of the studio, Joseph Schenck whom the dog was named after.

The chihuahua was included in a photo session Marilyn had with Earl Leaf that same year at Johnny Hyde’s home (her agent) where she had been living.

That autumn Marilyn had moved in with Natasha Lytess (her acting coach), bringing Josefina. She was feeding her calves liver and bought her an expensive quilt blanket to sleep on.

Below are photos of the new owner (Mrs Smithe) and “Josefa” with another dog, also called Tippy. This shows Marilyn was still in contact with the new owners two years after giving Josefina as the photos were dated June 1953. It’s not true that the dog died less than a year after being in Marilyn’s care.

Heritage Auctions note that the dog was given to Marilyn in 1948 but this is incorrect. The pencilled annotations on the Eastman Agency card show the date 14th April 1944 and therefore relate to a different set of photos as Josefina was not owned by Marilyn until 6 years later.

In 1956, when arriving in New York, Marilyn had two carriers. One contained a dog (which we will discuss shortly) and the other, a cat called Mitsou. Mitsou had fallen pregnant and Marilyn had supposedly become insufferable, giving her friends updates on the feline and pampering the pet to excessive lengths. According to Norman Rosten, he had considered changing his telephone number. Susan Strasberg had said Marilyn would play classical music and made a special bed for her pet.

The cat delivered several kittens but delivering the kittens wasn’t easy for Marilyn. She had telephoned Norman Rosten asking him to come over and help but instead, he said for her to name a kitten after him, gave her his love and hung up. She tried the veterinary surgeries but they didn’t believe the frantic woman on the other end of the line, claiming to be Marilyn Monroe was serious. Eventually, Marilyn managed to get her publicist Lois Weber Smith to contact a vet the next day.

Along with Mitsou, Marilyn Monroe and Arthur Miller owned a Bassett hound named Hugo (who Arthur nicknamed Flash). During her marriage to Arthur, they would spend a large amount of their married life in a rustic house in Roxbury. Hugo was photographed with Marilyn and Arthur on several occasions in both Amagansett (where they lived in the summer of 1957), Roxbury and Manhattan.

She would write to her step-children Bobby and Jane from Hugo’s perspective updating them on his goings-on. Marilyn also photographed the children playing with the lovable pooch.

In 1958, when Marilyn’s depression worsened, Marilyn felt Hugo was also feeling depressed. His vet recommended some whiskey which Norman Rosten witnessed Marilyn delivering to him on a spoon to help lift his spirits. As he stumbled around, Marilyn was concerned about his genitals due to his short legs, telling him to be careful. Marilyn decided to look elsewhere for remedies out of concern that he would hurt himself.

She said to Georges Belmont for Marie Claire in 1960: “I get up about eight-thirty or so, and sometimes when I’m waiting for our breakfast to be ready- we have an excellent cook – I take my dog, Hugo, for a walk. But when the cook is out, I get up early and fix Arthur’s breakfast because I think a man should never have to fix his own meals. I’m very old-fashioned that way.”

In 1960, Arthur got custody over Hugo, as they were to continue living in the country whilst Marilyn took possession of the city apartment.

Whilst living in Roxbury, Marilyn and Arthur bought a horse named Ebony from Frank Taylor and his wife. Taylor had published Arthur’s first novel and the family had become close to the Millers.

Marilyn and Arthur also owned a couple of parakeets, Butch and Clyde. It’s said that Butch could talk and during a flight once shouted, “I’m Marilyn’s bird!”

On 18th August 1958, Marilyn’s business manager Inez Melson, wrote to Marilyn discussing the birds and how their training is going.

Now about “Butch” and Clyde. I’m beginning to think that perhaps “Clyde” should be “Claudia”. I’m almost certain that it is a little hen. She is a very nervous bird and isn’t taming as quickly as Butch. However, she is much tamer than she was… Both birds are absolutely darling.

Pat loves them and Butch is fond of Pat. Will do more for him than for me. We let each of them out each day for a stay on the play pen and they love it… A few evenings back, they were all on the play pen, Josie, Bobo, Butch and Clyde… Your children are going to love the birds and have lots of fun with them.

In 1959, Marilyn and Arthur began to have an abundance of pets. Not only did Roxbury have a horse, dog and parakeets, they also acquired a pregnant Siamese cat, which Marilyn christened Sugar Finney, named after a character in a folk novel. She assisted Sugar Finney in delivering her kittens in the kitchen. Not only did Hugo write to Arthur’s children but so did the cat!

After the divorce from Arthur Miller in January 1961, Marilyn was given a poodle, maltese mix puppy. One story is that the pup was raised by the housekeepers of artists Vanessa Bell and Duncan Grant in Scotland. Then supposedly, Natalie Wood’s mother, Maria Gurdin purchased him and had the dog shipped to California.

However, on the American Kennel Club’s forms, Maf’s breeder is listed as Maria S. Gurdin of Van Nuys, California dated January 16, 1961 with the father being Andre du Bois and the mother being Shoo-Shoo.

The purchaser of Maf is also a mystery. One story goes that Frank Sinatra bought the puppy from Gurdin and gave him to Marilyn. Another, and more likely story in my opinion, is that Pat Newcomb (who was also publicist for Natalie Wood) bought the puppy for Marilyn for company after her divorce.

In March/April 1961 the dog was named ‘Mafia’ by Marilyn, a tongue-in-cheek reference to Frank Sinatra who was rumoured to have underworld connections. His name was then shortened to ‘Maf’, or ‘Maf-Honey’.

I had also considered that perhaps when Marilyn saw Maria’s name on the paperwork, she read it as “Mafia” and thought it would be funny to name him as such.

In August 1961, Marilyn moved back to LA with Maf (the same Doheny Drive apartment block she had lived in almost a decade ago) across the street from Frank Sinatra’s secretary, Gloria Lovell.

At the end of that year, Marilyn posed with Maf at the Beverly Hills Hotel for photos with Eric Skipsey.

In March 1962, Marilyn moved from Doheny to Brentwood to a modest hacienda. The guest house would double up as Maf’s home, where he slept on a beaver coat Arthur Miller had gifted her. Maf was required to sleep in the guest house due to his barking at the wind at night, disturbing her already failing sleep habits.

Marilyn would throw the ball around the garden each evening for Maf to return to her as the sun went down. This routine occurred on Marilyn’s last evening alive before she put him to bed in the guest house.

After Marilyn’s death in August 1962, Maf was adopted by Gloria Lovell her friend and ex-neighbour. It’s believed Maf died after being hit by a dairy van in 1974.

The Life of Marilyn Monroe »