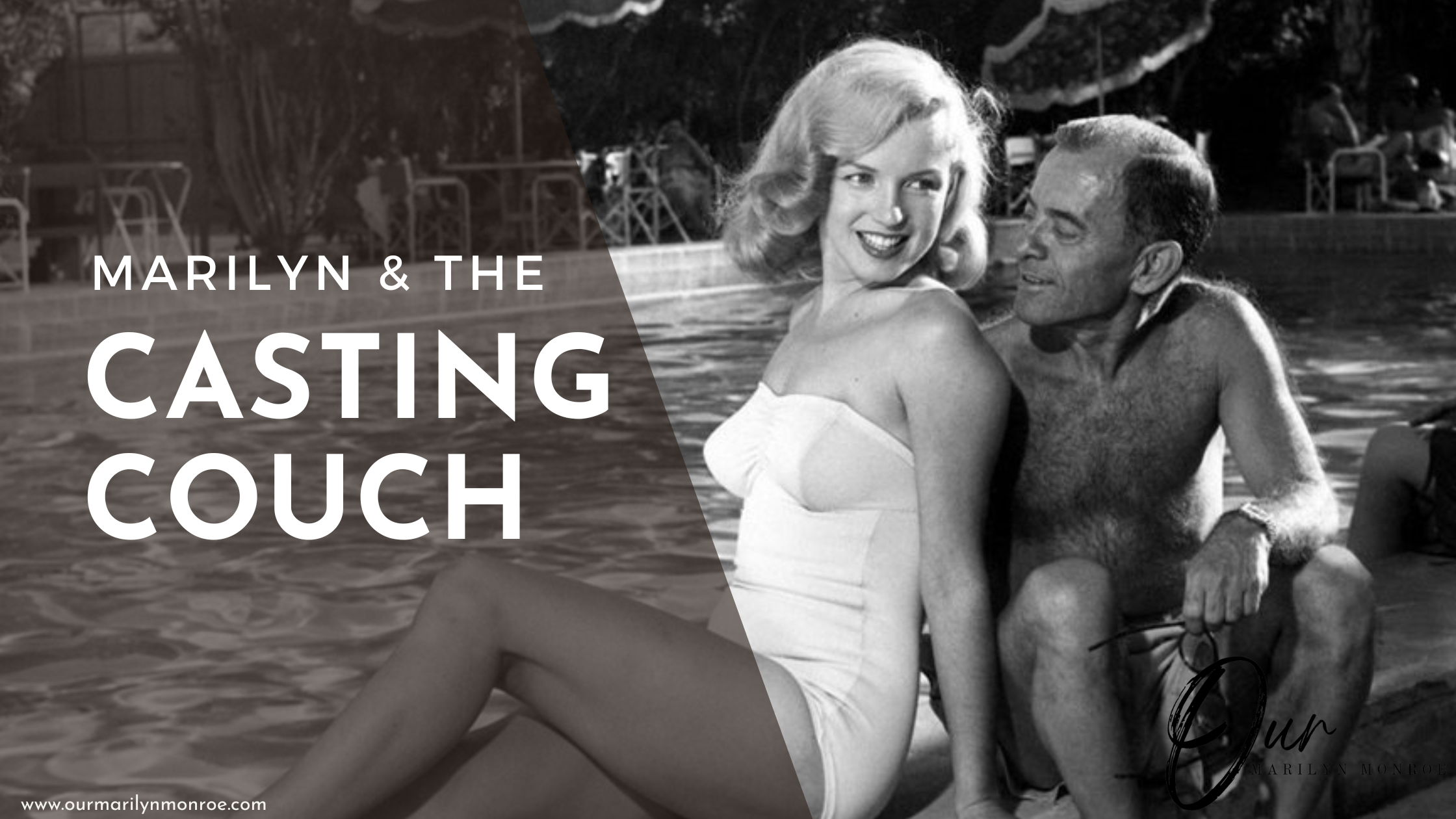 Marilyn Monroe was part of the casting couch system in Hollywood. That’s what many believe… but is it true?

In many people’s minds, Marilyn Monroe was unable to reach Hollywood stardom without using her body. However, she stated that she was “determined” to not become another starlet who slept her way to fame. That’s not to say she didn’t have help along the way…

IN HER OWN WORDS

In her ghost-written biography, My Story which was drafted in 1953 and 1954 (initially as articles), she discusses her time as a starlet, trying to make her way into Hollywood.

“These wolves just could not understand me. They would tell me, ‘But Marilyn, you’re not playing the game the way you should. Be smart. You’ll never get anywhere in this business acting the way you do.’ My answer to them would be, ‘The only acting I’ll do is for the camera.’ I was determined, no one was going to use me or my body—even if he could help my career. I’ve never gone out with a man I didn’t want to. No one, not even the studio, could force me to date someone. The one thing I hate more than anything else is being used. I’ve always worked hard for the sake of someday becoming a talented actress. I knew I would make it someday if I only kept at it and worked hard without lowering my principles and pride in myself.”

Marilyn also discussed how she turned down offers of private yacht trips with Harry Cohn, head of Columbia Pictures, which he did not appreciate. It may have even slowed her career down as her contract was not renewed after Ladies of The Chorus.

She had completed 12 films (credited) in the space of five years. Five of those movies didn’t even show her on the screen. Alas, she kept working even when her contracts weren’t extended.

In fact, Marilyn didn’t get a starring role until Don’t Bother to Knock (1952).

“I’VE ALWAYS WORKED HARD FOR THE SAKE OF SOMEDAY BECOMING A TALENTED ACTRESS.”

To stand out, Marilyn took several classes. She studied dance, singing and acting. Marilyn would also have many publicity photoshoots and attend events in an attempt to gain media attention.

“I could actually feel my lack of talent, as if it were cheap clothes I wear inside. But, my God, how I wanted to learn! To change, to improve! I didn’t want anything else. Not men, not money, not love but to ability to act.” – My Story

Whilst she was at Fox in the late 1940s, they sent her to The Actors Laboratory where stage writers and directors from Broadway came to present their work in Los Angeles. Many of the works focussed on the difficulties of the world which helped expand Marilyn’s outlook. It developed her interest in Method Acting, something she continued to work on until her death in 1962. Marilyn enjoyed her studies and spent 1947 following these acting lessons, reading plays and studying scenes. When she wasn’t working at the studio, she would often be taking part in study and theatre groups to continue her craft.

IT’S WHO YOU KNOW

Not only did she toil, but she attended many publicity events and studio parties where she networked, despite not being a fan of parties.

This is how she met connections like Joe Schenck (the former head of Fox) and Darryl Zanuck (current head of Fox at the time).

“In Hollywood a girl’s virtue is much less important than her hair-do. You’re judged by how you look, not by what you are. Hollywood’s a place where they’ll pay you a thousand dollars for a kiss, and fifty cents for your soul. I know, because I turned down the first offer often enough and held out for the fifty cents.” – My Story.

Rumours had circulated that Marilyn and Schenck had been sexually involved, however they both denied this. Marilyn stated to Maurice Zolotow:

“Get this straight Mr. Schenck and I were good friends. He gave me encouragement when I needed it. He didn’t do anything for me. He let Mr. Zanuck run the studio the way Mr. Zanuck wanted to run it. I know the word around Hollywood was I was Joe Schenck’s girlfriend, but that’s a lie. The only favor I ever asked him, Mr. Schenck, was later, when I was back at Twentieth. I wanted a decent dressing room, and I asked him about it, and he put in a good word for me and I got a good dressing room. I never asked him to help me get good parts at Twentieth, and he didn’t. He knew how I felt about it, that I wanted to succeed on my talent, not any other way, and he respected my feelings. I went to his house because I liked Mr. Schenck and I liked his food and it was better than the Studio Club food. I don’t mean to imply the Studio Club had bad food. I mean, let’s say, that Mr. Schenck’s cook was just better than their cook.”

Marilyn met Hollywood agent Johnny Hyde at the end of 1948.  Hyde, who was thirty years Marilyn’s senior, was married with children but became smitten by the young starlet. He left wife and children for Marilyn in the hopes she would agree to marry him, however Marilyn refused. She said of Johnny in 1961:

“I loved him dearly. But I wasn’t in love with him. He was wonderful to me and he was a dear friend. It was Johnny who inspired me to read good books and enjoy good music.”

Although Marilyn’s relationship with Johnny was not that of a typical casting couch system, it cannot be denied that he didn’t help her. With his connections, guidance and security Marilyn was able to help develop her status in Hollywood. Despite this, Marilyn’s career was slow and steady. with bit parts as a sexy secretary or dumb sex pot. It wasn’t until after Johnny Hyde’s death Marilyn’s career soared.

Whatever connections Marilyn may have had it took networking, work and time to make Marilyn Monroe the icon she was (and is). As Marilyn’s benefactor, Lucille Ryman said to Floral Muir in the 1950s: “Under Marilyn’s babydoll exterior, she is tough and shrewd and calculating or she wouldn’t be where she is today.”