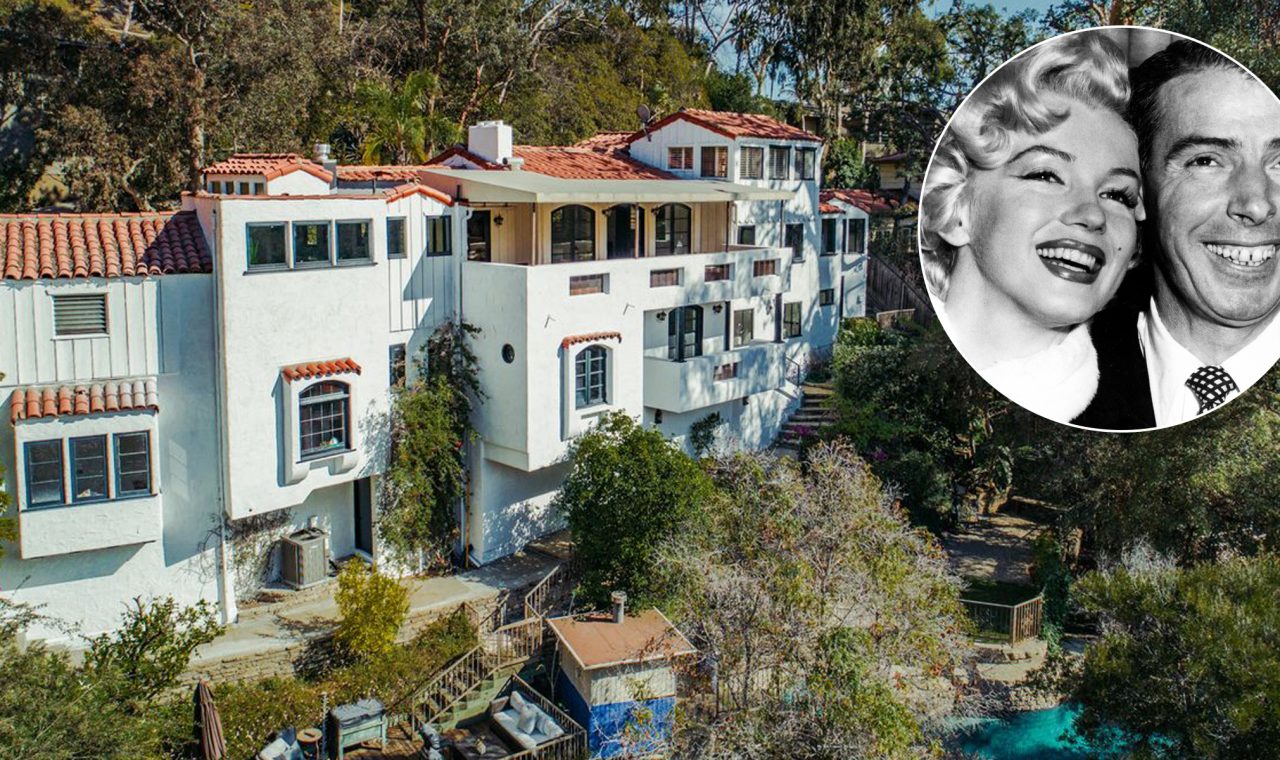 SOMETIMES I LOOKED AT WHAT THEY REPORTED ME AS SAYING AND I SAID “NO! NO! NO!”

The myths never end, do they? Especially with the likes of social media, people believe anything and everything they are told from those they look up to and admire. Before we know it, it’s public record and deemed as fact. But I like to show my fellow Marilyn fans the evidence.

So what ”facts” are we busting today?

The handwriting on the cheques for Castillion is very similar to Joe’s but this doesn’t confirm that he lived there with her in 1952. He may have stayed with Marilyn. But he didn’t live there officially.

The property was sold in 2019 to Black Cat Investments (the CEO is the father-in-law of a popular influencer who lives in the mansion) a real estate investment company for $2.7million.

12305 Helena Drive still stands, the neighbouring property was knocked down in 2018 but has previously been reported as being Marilyn’s last home that was destroyed.

3. MAF’S PAWPRINT IS IN THE CASTILLION DRIVE PROPERTY

Marilyn lived in this home a decade before Maf was born so this wouldn’t be Maf’s pawprint. A quick Google on when Marilyn got Maf would show that the only home Maf shared with Marilyn was 12305 Fifth Helena Drive in Brentwood in 1962. You can read more about Marilyn’s pets here.

4. MARILYN WAS ALWAYS DESPERATE TO HAVE A CHILD

Although it is common knowledge that Marilyn couldn’t have children, despite wanting them, it’s often mistaken that Marilyn was 100% positive that he wanted to be a mother. In some notes made in 1957 she crossed out:

“I don’t want any children because I only could trust every delicate and indelicate feeling of my child with myself in case of accident (sounds like my identification card). There is no one I trust.”

This likely meant, as is common in many, that she wasn’t certain if she wanted to be a mother at that time despite stating on numerous occasions she wanted as many children as possible. Marilyn likely knew motherhood would not be easy and would have to rely on others for help (as a mother, this is 100% true), but as she noted, she didn’t trust anyone to do so. Thanks to Silver Technicolor for pointing this one out to me. You can read more about Marilyn and her fertility journey here.

5. THERE’S A MARILYN MONROE SIGNATURE ON THE CEILING AT CASTILLION DRIVE

Scott from The Marilyn Monroe Collection demonstrated that when comparing autographs he owns that this is not Marilyn’s signature, although any Google search would easily show this too.

In addition, Magic Markers were first sold in 1953, but the thicker markers weren’t released until 1962 and the signature would have certainly faded. Sharpies weren’t sold until 1964.

6. MARILYN WAS A LOVER OF JEAN HARLOW’S MOVIES

In 1952, Louella Parsons asked Marilyn, “Are you pleased about playing the life of Jean Harlow?” to which Marilyn responded, “Oh, is it true? It’s the first time I’ve heard it. So many people say I look like Jean Harlow, and I’d love to do her life story. I never saw any of her pictures, but from her photographs, I am proud that I am said to look like her.”

This demonstrates that by 1952 Marilyn had not yet watched (or at least remembered watching) any of Harlow’s movies, despite it being a popular belief that she was a huge fan of Harlow and her films since she was a young girl. This is interesting as many today would say they are also fans of Marilyn but perhaps more than likely in terms of Marilyn’s image as opposed to her films.

Of course, Marilyn did reference that she was happy that when she was a young girl, she and Jean both had the same white hair which made Norma Jeane happy. “I had platinum blonde hair and people used to call me ‘tow-head’. I hated that and dreamed of having golden hair… until I saw (Harlow), so beautiful and with platinum blonde hair like mine.”

Apparently, when Marilyn read the script for the biopic of Jean Harlow she stated, “I hope they don’t do that to me when I’m gone.”

A lot of the items that have been “found” in this property and branded as hers were in fact dated AFTER she moved out. For example, a burnt magazine (Modern Packaging) from June 1953 was released 5 months after she left the property. The “found” items have not been authenticated.

Previous owners also never seem to have claimed to have found the items, despite living in the home for 20 years.

8. MARILYN WAS BROKE WHEN SHE DIED

One of the common “tragedies” that surround Marilyn’s death is that she was “broke” when she died. However, this is not entirely true. Yes, she was loaned money from Joe DiMaggio for her home and one of her accounts was overdrawn. But Marilyn had multiple bank accounts.

9. MARILYN’S BARON PHOTOS WERE TAKEN AT HER HOME

It has been cited that Marilyn’s photos with Sterling Henry Nahum (Baron) were taken at… you guessed it! Castillion Drive. But they were fact taken in 1954 (over a year after she left the property) and at Harry Crocker’s home. There are no known photos of Marilyn at Castillion Drive.

10. MARILYN HAD HER HAIR CUT AND STYLED AT MADISON SQUARE GARDEN BEFORE SINGING TO THE PRESIDENT

Firstly, thanks to ma girl April for pointing this out and Scott for getting the word out.

So, Miss K was given some of Marilyn Monroe’s hair. Except, it wasn’t her hair. According to Ripley’s Believe It Or Not, Robert Champion styled and cut Marilyn’s hair for the JFK gala.

Paul Fraser Collectibles sold the hair in 2019. Their description for the item is “Just hours before her performance, Monroe visited her personal hairdresser Robert Champion at the Coiffures Americana Beauty Salon, housed within the luxury department store Bergdorf Goodman on Fifth Avenue.”

However, the documents from the time show differently. Marilyn actually had had her hair coiffed and styled by Kenneth Battelle (she also required his services the day before) for $150. As you can see from the photo above, Marilyn was well and truly ready for the event when she left her apartment. Therefore, it’s with 100% certainty that Robert Champion didn’t touch Marilyn’s hair that evening, meaning the hair Kim and Ripley’s own is not Monroe’s. The reference of Robert Champion has now been removed from Ripley’s despite them still claiming they own her hair.

As mentioned before, it’s high time we focus on facts, sources, and documents that support claims instead of believing articles, influencers and information that is released to tabloids decades after Marilyn’s passing. It’s exploitation.

« Part II: Marilyn’s Peers: Who Can We Trust?